Survived the Nostromo Xenomorph encounter.[1]
Jones, nicknamed "Jonesy",[3] was a ginger American Shorthair[4] tomcat kept aboard the USCSS Nostromo as Ellen Ripley's pet.[5] While the cat's official purpose was to control rodents aboard the ship,[6] it also served as a source of relaxation and entertainment for the crew on long space journeys.[7]

Jones and Ripley were the only individuals who survived the Nostromo's encounter with a Xenomorph and the ship's subsequent destruction.

Owing to Jones' small size and mass, he comfortably shared a hypersleep capsule with one of the crew members during the Nostromo's long journeys.[8] When the Alien began stalking the ship's occupants, Jones was apparently of little interest to the creature (most likely because his biology made him unsuitable for reproduction) and he survived the incident unscathed. However, he was indirectly responsible for the death of Brett; when the latter pursued Jones through the ship's cargo hold, seeking to catch him so that he would not be accidentally picked up on the motion trackers being used by the crew to hunt the Alien, the cat inadvertently lured him into a room where the Alien was hiding. Jones watched on as the Alien dragged Brett's body into the air shafts.

Ripley later found Jones and put him in a carry case. At one point, Ripley was forced to abandon Jones to the Alien, but, while the Xenomorph was notably distracted by the cat, it did not attack it. Jones was later recovered and put in hypersleep aboard the Narcissus after escaping with Ripley.

When the Narcissus docked with the Marion, Jones and Ripley were roused from hypersleep by Hoop and the rest of the crew and found themselves in the midst of another Xenomorph incident. When the human survivors were forced to descend to LV-178 below in order to recover a replacement fuel cell for the Narcissus, Jones stayed aboard the shuttle, safely locked inside with an adequate supply of food left for him by Ripley. When Ripley returned and was put back into hypersleep by Hoop, Jones once again curled up inside her cryotube to sleep for the rest of their return journey to Earth.

"And you, you little shithead, you're staying here."
―Ripley to Jones (from Aliens)

Ripley and Jones remained in hypersleep for 57 years. They were eventually saved by a deep-space salvage crew and taken to Gateway Station, where they were reunited after Ripley had undergone a thorough medical examination. Despite the fact pets were not allowed aboard the station, an exception was made for Jones, given the extreme nature of Ripley's experiences.[9] When Ripley was stripped of her flight status, she and Jones subsequently moved into an apartment on Earth.[10] When Ripley agreed to return to LV-426 aboard the USS Sulaco, Jones stayed behind on Earth. Prior to her death on Fiorina "Fury" 161, Ripley sadly realized that Jones would most likely have died during the time she had spent traveling to and from LV-426 in hypersleep.[2]

In Alien, four cats were used to portray Jones, with one for holding, hissing, scampering, etc.[11]

Originally, during the Gateway Station park scene in the Special Edition of Aliens, Jones was to stalk a fake bird hopping among fallen leaves and then jump at it, hitting the wall.[12] This scene may have been cut due to the crew being unable to make the cat jump at the wall.

Jones in one of Ripley's dreams.

Jones witnesses Brett being killed by the Alien.

Jones and Ripley going to sleep in the Alien comic.

Jones on card 15 of the Alien trading cards.

Cover to My Day by Jones: The Cat's-Eye View of Alien by Anne Billson. 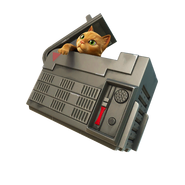 Jones in his carrier, appearing as an accessory in Fortnite.