"You are... a beautiful, beautiful butterfly."
―Dr. Gediman (from Alien Resurrection)

Part of the team that cloned Ellen Ripley.

Gediman was one of the first to be taken during the Xenomorph outbreak. He was cocooned in the Queen's Hive and impregnated with a Chestburster, but he was killed by the Newborn before it could hatch.

"We've remade you. We cloned you."
―Gediman to Ripley 8 (from Alien Resurrection)

Gediman was one of the chief scientists in Dr. Wren's project to recreate the Xenomorph species. After 10 years of trial and error,[6] Gediman and the other scientists succeeded in creating a seemingly perfect recreation of Ellen Ripley, along with the Xenomorph Queen embryo gestating inside her. When the Ripley clone, known as Ripley 8, was fully matured, Gediman himself performed the operation to surgically remove the Chestburster. To Gediman's relief, Wren relented on his original plan to destroy Ripley 8 once the Queen had been harvested, and elected to keep her alive for study.

Gediman's duties were subsequently split between observing the growing Queen and studying Ripley 8. Of all the scientists aboard the Auriga, Gediman in particular was fascinated and impressed by Ripley 8's abilities, particularly her genetic memory, inherited from the Xenomorph genes in her body, that allowed her to remember elements of Ellen Ripley's life. Once the Betty arrived aboard the Auriga with kidnapped hosts for breeding several Xenomorphs, Gediman observed the implantation process. Gediman became fascinated by the fully-grown Drones, spending a large amount of his time studying and interacting with them. It was Gediman who "instructed" the Lead Alien in the operation and purpose of the freezing nitrogen spray installed as a safety feature in the Xenomorph holding cells, an act that would later prove to be the undoing of the entire ship.

Serious situation in the mess hall

Through a security camera in the Xenomorph observation chamber, Gediman and Dr. Williamson witnessed Dr. Wren and his security detail confronting the crew of the Betty in the station's mess hall over Annalee Call's attempts to sabotage the Xenomorph breeding program. Shortly afterward, the confrontation turned violent, resulting in a shootout that claimed the lives of most of the USM personnel present, save for Wren and Private Distephano.

Horrified by what he had witnessed, Gediman attempted to contact security and requested to send more troops into the mess hall to apprehend the surviving Betty crew members. However, for unknown reasons, his efforts were lost in translation.

While Gediman was distracted attempting to contact security, two of the Xenomorphs noticed the freezing nitrogen spray was deactivated, and upon realizing what this meant, they attacked and eviscerated a third, killing it. The dying creature's tail slammed against the window to the observation booth, alerting Gediman, who immediately noticed the acidic blood burning through the cage. Gediman quickly thought to end the escape attempt by activating the freezing nitrogen spray to deter them from escaping—but too late, the Xenomorphs managed to escape through the newly-created hole in the floor. Gediman cautiously entered the cage to investigate, and as he peered into the melted hole in the floor, he was suddenly seized by a Drone and pulled into the hole, as Williamson watches in terror.

Gediman was later cocooned in the Hive built in a waste tank at the bottom of the Auriga.[7] He was likely impregnated with a Chestburster, but before it could hatch he witnessed the birth of the Newborn. Although distressed by the creature's slaughter of the Queen, he was mesmerized by the specimen and did not realize the danger it posed until it was too late. Once it had drawn close to the cocooned scientist, the Newborn tore out his brain with its teeth, killing him instantly.

"I grin and it grins. Its purity sets us free. I too will transform."
―Haiku about the Cloned Xenomorphs, written by Gediman (from Alien: The Weyland-Yutani Report)

Gediman was a psychologically unsound individual — he displayed an unnatural level of interest in the Xenomorphs he helped create, and during the development of the Xenomorph cloning project, he wrote numerous haiku about both Ripley 8 and the Xenomorphs themselves.[8] However, his mental imbalance was concealed from his superiors by Wren, who feared he would lose his brightest molecular engineer should his mental well-being be called into question.[1] Gediman's obsession with the Xenomorphs was evident in how he taunted them whilst in captivity; he was known to playfully bare his teeth at the Lead Alien in its holding cell, marveling as the creature apparently mirrored his actions. His mental condition deteriorated following the containment failure aboard the Auriga and his capture by the Xenomorphs, and he descended into clinical insanity, most overtly displayed in his hysterical ramblings within the Hive and during the birth of the Newborn. Indeed, his ill-advised reverence for this creature ultimately led to his demise.

Despite the immoral project that he was heavily involved in and his questionable mental health, Gediman notably possessed a far more sympathetic side than his fellow scientists. In particular he showed genuine concern for Ripley 8's well-being, and was relieved when Wren made the decision to spare the clone after the Queen had been removed. Gediman insisted on referring to Ripley 8 as a "she" (whereas Wren and others would exclusively use the term "it" when referring to the clone). He was also reduced to tears when he observed the captive civilians brought by the Betty crew being impregnated by Facehuggers, although this remaining humanity was overcome by his desire to see the project to completion.

Gediman about to be killed by the Newborn. 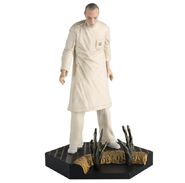