"Johnson, where the hell did you learn to fly?"
"Flight school. The same place that taught me not to fly blind in hurricane winds."
―Maj. McCain and Johnson (from Aliens versus Predator 2)

Jen Taylor
Johnson was a member of the United States Colonial Marine Corps and dropship pilot of USS Verloc.

She is the premier dropship pilot aboard the Verloc. She carries out the Marines' dropship missions, and rescues Harrison towards the end of the Marine campaign.

She has a strong accent, which is meant to be British, and a strong-willed personality, as shown in her response to Major McCain criticizing her after the Dropship almost crashes on LV-1201.

Johnson in the hangar bay aboard the USS Verloc, with her dropship in the background 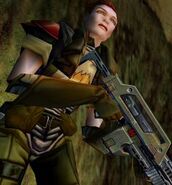 Retrieved from "https://avp.fandom.com/wiki/Johnson_(USS_Verloc)?oldid=239861"
Community content is available under CC-BY-SA unless otherwise noted.