"I say that we abandon this ship! We get the shuttle and just get the hell out of here! We take our chances and... and hope that somebody picks us up!"
―Lambert (from Alien)

Veronica Cartwright
Joan Marie Lambert[2] was the navigator aboard the commercial towing vehicle USCSS Nostromo. She was serving on the ship during its fateful voyage in 2122, when it encountered a Xenomorph on LV-426, an incident that eventually led to the destruction of the ship and the loss of all but one of its crew.

Lambert was killed by the Alien whilst gathering oxygen tanks that would allow the survivors to flee the Nostromo in its shuttle, the Narcissus.

Lambert was born on November 7, 2093 in Ontario, Canada; initially born male, she underwent Despin Convert sexual realignment at birth for undisclosed reasons.[2] After growing up in Arkansas, she studied astronavigation at the Florida Aeronautics Institute, graduating with a CBS-2 rating in FTL navigation.[2] The Nostromo was her first posting.

"Look, would you open the goddamn hatch?! We have to get him inside!"
―Lambert, to Ripley when stuck outside the Nostromo (from Alien)

When the Nostromo set down on LV-426, Lambert was one of the three crewmembers chosen to investigate the signal coming from the moon's surface, along with Captain Dallas and Executive Officer Kane. The trio eventually stumbled across a derelict ship, and despite Lambert's discomfort and desire to leave, the decision was made to explore further. Inside Lambert and the others discovered the remains of the Pilot before Kane was attacked by a Facehugger in the ship's hold. Lambert and Dallas managed to assemble a makeshift stretcher from their equipment[6] and carried Kane back to the Nostromo, where Ash let them in, despite Ripley's misgivings.

"I say that we abandon this ship! We take the shuttle and just get the hell out of here!"
―Lambert, to Ripley and Parker (from Alien)

With each successive crewmember killed aboard the Nostromo by the Alien, Lambert became increasingly volatile, finally snapping after Dallas was taken inside the air shafts and hysterically insisting that the remaining survivors evacuate aboard the Narcissus, irrespective of the fact the shuttle would not take four passengers for any length of time. Although Ripley initially convinced her that their best chances lay with killing the Alien, once Ash — revealed to be an android sleeper agent — told them of Special Order 937 and pointed out the futility of fighting the creature, the three remaining survivors agreed to destroy the ship and make their escape. However, they would need to collect a large amount of extra coolant for the shuttle's life-support system if all three were to survive, and so Lambert and Parker went to the Nostromo's lower deck to collect supplies while Ripley primed the ship's self destruct system to kill the Alien after they left.

While gathering coolant, the Alien snuck up on Lambert, who immediately froze with terror and was unable to flee. At the same time, Parker could not kill the creature with his Flame Thrower for fear of hitting Lambert as well, and so he drew a hook and charged the Xenomorph. The Alien quickly killed him before returning to Lambert, who was still paralyzed with terror. The Alien then killed Lambert by ripping a hole through her face and slung her bloodied corpse from the ceiling.[7] Ripley heard Lambert's hideous screams over the ship's intercom as she rushed to save her friends, but she arrived too late. Lambert's corpse hung from the ceiling, while Parker lay dead nearby.

According to her Weyland-Yutani file, Lambert suffered from hyperactivity and nervousness.[2] As a result, she was typically disinclined to take risks beyond the confines of her job as navigator aboard the Nostromo. She objected to being chosen as one of the three people to explore the derelict and later resented Ripley for refusing to let Kane, Dallas and herself back on board the ship after Kane was attacked by the Facehugger.

As the Alien began killing the Nostromo's crew, Lambert became increasingly unable to cope with the situation, particularly following the loss of Captain Dallas; as Lambert had been operating the motion detector tracking both Dallas and the Alien at the time, it is possible that she blamed herself for his death. Her instability fueled her desire to evacuate, despite the fact that the Narcissus shuttle was inadequate to sustain all the remaining crew. Ultimately, her hysteria cost herself her life, as she froze in fear when approached by the Alien.

During her time exploring LV-426, Lambert armed herself with an RXF-M5 EVA Pistol holstered on her space suit, although she was never seen using it.

When Dallas attempted to flush the Alien from the Nostromo's vents, Lambert operated one of the two tracking devices constructed by Ash.

The way in which Lambert's character died changed several times throughout the production of Alien. In an early draft, Lambert (named Melkonis at this point) has her head twisted around and wrenched off by the Alien.[8] A later draft has Lambert taken by the Alien, before Dallas, cocooned in the Nostromo's hold, later tells Ripley that the Alien ate her. Another script revision had Parker unintentionally incinerate her when he tries to kill the Alien with his flamethrower. Perhaps the most interesting of Lambert's deleted deaths is one where she was to be sucked out into space through a very small hole in the Nostromo's hull.[8] This version was dropped due to budget and special effects limitations, but the idea reappeared in David Twohy's unproduced script for Alien3, and such a demise was later used for the death of the Newborn in Alien Resurrection.

Even once filming was complete, Lambert's death was changed. Originally, Lambert was to crawl into a locker and simply die of fright. However, time constraints meant this footage was never shot, leaving the production to figure out a death for Lambert in editing. As such, the legs seen when the Alien's tail creeps up between Lambert's legs are not actually Veronica Cartwright's, but those of Brett actor Harry Dean Stanton, as the footage is recycled from a longer, unused version of Brett's death scene.[9] Through the use of graphic sound effects, Ridley Scott was able to imply Lambert's death without having any footage to actually show what was happening.

Lambert face to face with the Xenomorph.

Lambert as she appears in Alien: The Illustrated Story.

Lambert punching Ripley in the comic. 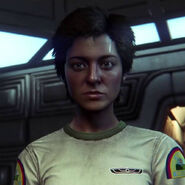 Lambert as she appears in Crew Expendable. 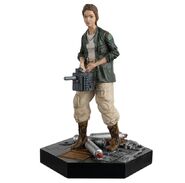 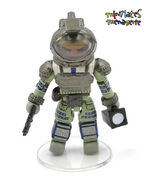 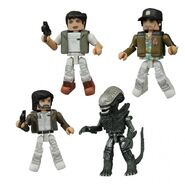