"Damage sustained-in combat to - central processing...Experiencing system - failures. Prime direck-directive enforcement program has been - incapacitated. But I still know a son of a bitch when I see one."
―Jeri before killing Caspar Nordling (from Aliens: Stronghold)

Assisted Philip and Joy Strunk in escaping Nordling's facility
Killed Caspar Nordling
Jeri was a synthetic replica of a Xenomorph designed to infiltrate organic alien Hives. A successor to the original synthetic hive infiltrator Norbert, it appears identical to a typical Xenomorph Drone, and served on doctor Caspar Nordling's Xenomorph research facility. After discovering Nordling's true motives, it, alongside the other synthetics working there, assisted Philip and Joy Strunk in escaping the facility.

"Stan Mayakovsky designed and built the first synthetic alien creature, after which I am modelled, with substantial modifications. If you've read his book Cyberantics you can guess his reason for doing this - hive infiltration. Like that model, I'm equipped with artificial pheromone secreters. However, my reasoning faculties are more advanced."
―Jeri to the Strunks (from Aliens: Stronghold)

As a Xenomorph Hive infiltration synthetic, Jeri was equipped with artificial pheromone secreters, in order to blend in. Unlike Norbert, Jeri had a more developed and friendly personality, substantially improved reasoning skills and Asimov protocols that prevented him from harming humans. Jeri also demonstrated the ability and skill to navigate complex computer systems, as well as utilize a standard issue pulse rifle in a combat situation.

Named after an entertainer from the 20th century, Jerry Lewis,[citation needed] Jeri was a synthetic Xenomorph developed by the Grant Corporation, and served as a successor to the original Xeno-hive infiltration synthetic, Norbert, originally designed by Dr. Mayakovsky.

After supply runners Philip and Joy Strunk arrived at doctor Caspar Nordling's research facility, he personally introduced the two to Jeri, who were initially startled by him. He ultimately made the too feel more at ease with his friendly personality, and detailed his creation and Mayakovsky's legacy. After a snafu in Caspar's contained hive, heavily-armed specialized Combat android Dean was called in to pacify the situation. Nordling enjoyed teasing Jeri, specifically sending him into the hive on errands, only for him to desperately identify himself to Dean before his is killed by the latter.

Siding with the Strunks

Joy was ultimately suspicious of Nordling's motivations, and, after being directed to the facility's monitoring systems to check on security by Nordling's secretary Lizzy, she decided to look into the facilities productivity files. There, she found an additional unverified two ship landings in the facility, and that egg-harvesting rates were incredibly small given the size of the hive. She was suddenly startled by Jeri, who noticed her activity and directed her to the correct files before leaving. Joy was suspicious of Jeri, who suspected that he was spying on her.

Jeri was later seen serving as waiter to Nordling and the Strunks during dinner.

The Strunks suddenly came to the realization that Nordling had drugged their wine, and subsequently fell unconscious. The two awaken in the hive, restrained and facing two Eggs. As one of them hatched and Joy yells in terror, the two were suddenly saved by Jeri, who killed the emerging Facehugger and swiftly took the two to safety. Joy was still immensely suspicious of Jeri, and also accused him of taking the two to the hive in the first place. Jeri protested, and stated that his primary programming disallowed any human from being harmed. In order to gain their trust, Jeri went on to assist the two in escaping the facility.

Although the three initially approached Dr Payne for assistance, requesting the one of two keys in the facility to the weapons cache, he refused to do so due to his programming. After the three go to the landing bay for their ship, it was shown that Nordling locked the door to their hatch. They also found another ship there. Jeri clarified that it belonged to Grant-corp member Chaut, who periodically arrives to pick up eggs. However, Joy deciphered to the two that Nordling was clearly selling eggs to criminals on the black-market, and that Chaut was a smuggler. They suddenly encountered Chaut, who was busy buying Xenomorph eggs from Nordling. With the Strunks posing as synthetics, Chaut tried to get Jeri to do his thing with smoking one of the cigars that Nordling had given him, but Jeri explained he was in a hurry and Chaut told him to keep the cigar.

They went on to infiltrate Nordling's office to access his terminal in hopes of accessing their ship, but Dean suddenly crashed into the office and restrained Jeri. Nordling emerged and held the Strunks at gunpoint. However, after Jeri identified himself to Dean, and Dean released him, Philip subsequently attacked the scientist, but he is saved by Lizzy, who breaks Philip's wrist. With his First Law programming not applying to fellow androids, Jeri cut her hand off and partly bisected her head, and the three briskly retreated.

Jeri and the Strunks were soon met with Payne and the rest of the synthetic staff working there, armed. Though it appeared as though they were hostile, it is revealed that they actually sided with Jeri and the Strunks, and began destroying Nordling's research facility.

Nordling in a fit of rage, ends up overriding security measures and opened the entrance hatch to the hive, causing hundreds of Xenos to flood out. The Strunks and synthetics are suddenly rushed by a wave of Xenomorphs. The group hold out valiantly in a brutal firefight, but are ultimately overwhelmed. Just before they are killed, Dean crashes through the wall and, after being granted permission by Philip, joins the slaughter. Eventually the synthetics bought the Strunks enough time to board their ship and escape, despite Joy's objection of leaving Jeri and the others behind.

Nordling, meanwhile, had reached his escape pod and also managed to escape the facility. However, a severely damaged Jeri had snuck aboard with him, and despite his pleas to spare him, Jeri killed him by lighting a virus-tainted cigar that he used to poison Chaut, Jeri citing that "I still know a son of a bitch when I see one".

What happened to Jeri is unknown, but since his systems were failing, it can be assumed that Jeri was deactivated, or he shut down shortly afterwards.

"My that was some scream. You gave me quite a shock."
―Jeri to the Strunks upon meeting him (from Aliens: Stronghold)

Comically contrasted in bounds by his threatening exterior, Jeri was a helpful, and quirky android with a polite and formal personality. After realizing the peril the Strunks faced, he immediately came to their aid and assisted them in escaping Nordling's facility. Jeri's programming forbade him from opposing or harming his superior, Nordling, and he begrudgingly followed his orders with diligence. It wasn't until his First Law programming was damaged from the battle with the Xenomorph horde did Jeri ultimately decide to kill him, deeming the doctor a "son of a bitch". He also had a sense of dignity that left him embarrassed when Nordling constantly made him smoke a cigar using his inner jaw, for cheap laughs.

Jeri had a tumultuous relationship with Dean, as Dean's primary programming to eliminate Xenomorphs often found himself on the business end of Dean's plasma rifle, and Jeri's ability to speak had saved him on more than one occasion. As a result, he held a more stressed and sarcastic demeanour around his lumbering comrade.

Jeri on the front cover of issue 3.

Jeri on the front cover of the Aliens: Stronghold trade paperback. 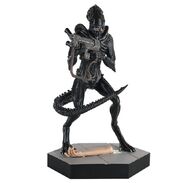