Jenette Goldstein
Private First Class Jenette Vasquez[1] was a Smartgun operator with the United States Colonial Marine Corps, part of 2nd Battalion Bravo Team.[7] She was the sister of Carmen Vasquez. Jenette was a member of the combat unit deployed to LV-426 aboard the USS Sulaco in 2179, to investigate the sudden loss of contact with the colony of Hadley's Hope. She was subsequently involved in combating the Xenomorph infestation at the colony.

Vasquez was part of First Squad's gun team, along with Private Hudson.[5] She had a long history with fellow Smartgun operator Private Mark Drake,[8] and the two shared a close, possibly romantic relationship. Vasquez was among the last to perish in the incident, committing suicide with Lieutenant Gorman rather than be captured by the Xenomorphs for impregnation.

"You need to be like me, little Carmen. Be ready to kick some ass and take some. Anytime, anywhere."
―Vasquez, to her sister (from Aliens: Colonial Marines)

Vasquez had a younger sister named Carmen who apparently looked up to her, no doubt in part due to Vasquez's protective role in their relationship. Originally born outside of the United States, her means of entry into the country are unclear, although it was insinuated by others that she was an illegal immigrant.[5] In her youth she was part of a street gang, a lifestyle that ultimately led to her committing murder at a young age and being sent to juvenile prison.[9] It was there that she met, and became close friends with, Mark Drake. In 2172, both Vasquez and Drake, who had also been incarcerated for murder, enlisted in the USCM as part of the Service or Jail Act in order to avoid further detention.[1] The two subsequently passed through boot camp together, requesting assignment to the same unit, and both enlisted in advanced weapons training. They remained incredibly close — earning them the nickname "the sweethearts" from their Smartgun drill instructor — although both denied a romantic relationship.[1]

During her early career, Vasquez was cited several times (often along with Drake) for disorderly conduct, although she eventually went on to become a dedicated Marine — in 2175, she earned a silver National/Interservice/Marine Corps Rifle Competition badge, and became an active member of the USCM At-Risk Youth Outreach program in 2177, seeking to help young individuals struggling from the same issues that had affected her in her youth.[1] Vasquez eventually obtained the rank of Private First Class.

"I only need to know one thing: where they are."
―Vasquez to Ripley, regarding the Aliens (from Aliens)

Vasquez, like the rest of the Marines, assumed the mission to LV-426 was going to be a waste of time. After spending the morning training and cracking jokes with her fellow Marines, Vasquez openly questioned Ripley's account of the Xenomorph she had encountered aboard the USCSS Nostromo. After the briefing, Vasquez and Drake busied themselves with preparing their Smartguns, before boarding the section's APC for the drop to the planet's surface. When the Marines landed on LV-426 to find the colony abandoned, Vasquez assisted in clearing the ground floor with Private Hudson, where a motion tracker reading caused them to mistakenly identify a pet hamster as a threat.[10] Vasquez and Hudson were also the first to discover evidence of Xenomorph activity at the colony when they found large holes burned through several levels of flooring by Xenomorph blood.

After Second Squad found a single colonist, Newt, in the operations building, the remaining inhabitants were traced to the nearby Atmosphere Processing Plant and Vasquez and the other Marines set off to investigate further. They quickly found the Xenomorph Hive, but were subsequently ordered to hand over their ammunition and deactivate their Smartguns to prevent gunfire causing damage to the Atmosphere Processor's coolant systems; however, after handing over their battery units to Sergeant Apone, Vasquez and Drake secretly reactivated their guns using backup batteries that Vasquez had hidden in her harness.

Ambush and death of Drake

―Hicks and Vasquez (from Aliens)

After discovering the remains of the Hadley's Hope colonists, who had been used as hosts for Xenomorphs, the section was ambushed by a horde of Drones and even though Vasquez and Drake provided heavy covering fire with their Smartguns, many Marines were taken or killed. As the survivors hastily retreated to the APC, Vasquez spotted a Drone attempting to sneak up on Drake, who was preoccupied with covering the team's rear. Although she blasted the creature with her Smartgun, it exploded and showered Drake with its acid blood, killing him. A distraught Vasquez initially refused to leave him, thereby blocking the APC's open door and preventing the vehicle from evacuating, but Corporal Hicks convinced her that there was nothing she could do for him and the team pulled out without further loss of life. Afterwards, Vasquez placed blame for the incident on the unconscious Lieutenant Gorman and had to be physically restrained from attacking him.

After calming down, Vasquez went over their tactical options with the others. Considering their remaining arsenal, she proposed using nerve gas on the aliens. Ripley, instead, suggested the more effective solution would be to nuke them from orbit. However, Burke protested against destroying an "important species" and an expensive facility. Fortunately, Ripley reminded that their mission was under military jurisdiction and thus Hicks was granted de facto command.

"Alright. We got seven canisters of CN-20. I say we roll them in there and nerve gas the whole fucking nest."
―Vasquez, discussing how to proceed after the ambush (from Aliens)

After the section's dropship Bug Stomper was brought down by Xenomorphs, the remaining personnel retreated to the operations center and fortified their position with what few supplies they had left. Vasquez and Hudson set up sentry guns in the tunnels beneath the colony to try and fend of the Xenomorphs, but the position was quickly overrun. When Ripley and Newt were trapped in the med lab with two live Facehuggers, Vasquez helped to save them, killing the creature that had been attacking Ripley after Hicks removed it.

"You always were an asshole, Gorman..."
―Vasquez's last words, to Gorman (from Aliens)

When the Xenomorphs cut power to the operations building, Vasquez and Hudson were dispatched into the corridors with motion trackers to investigate. They quickly detected a large group of Xenomorphs advancing on their position. Despite falling back and helping Hicks to seal the operations room door, the Drones entered the room through the ceiling and quickly overwhelmed the few survivors. Vasquez held the creatures off as the others came up with an escape route, using her Pulse Rifle's grenade launcher to devastating effect. She subsequently covered the rear as the team escaped through the colony's ventilation ducts, although her Pulse Rifle ammunition soon ran out and she was ambushed by a v that emerged from a vent overhead. She managed to kill the creature with her sidearm, but its spilling blood badly wounded her legs, immobilizing her.

With her ammunition exhausted and unable to escape, Vasquez was surprised when, of all people, Gorman returned to rescue her. Even so, the two were quickly surrounded and when Gorman's pistol ran out of ammunition, he pulled an M40 grenade, intending to take their lives rather than be captured to be used as hosts for the Xenomorphs. Vasquez and Gorman activated the grenade together, killing themselves and taking out several Drones that were about to drag them away.

"Then there's my tía. Private Jenette Vasquez. Colonial Marine. Her unit got hired out by W-Y for some mission. Never to be seen again. All records scrubbed. Only got a few memories of her, but one of her favorite sayings is the motto of Renegade XM. El riesgo siempre vive. The risk always lives."
―Cutter Vasquez regarding his aunt (from Aliens: Aftermath)

Following her death, all record of Vasquez, her unit, and the mission on LV-426 were erased by Weyland-Yutani. Years later, her nephew and member of the extremist journalist group Renegade XM, Cutter Vasquez, would return to Hadley's Hope in hopes of revealing her fate. Cutter found traces of his aunt, including her smartgun, but he and most of the other crew were killed by a Glowing Xenomorph that stalked the dilapidated wreckage of the colony.

"Hey, Vasquez. Have you ever been mistaken for a man?"
"No. Have you?"
―Hudson and Vasquez (from Aliens)

Vasquez had a brash personality, and was cocky with regards to her own abilities, as well as the abilities of the USCM as a whole. During Ripley's briefing, she made no secret of the contempt with which she held the civilian adviser's account, passing the Xenomorphs off as an insignificant adversary that would pose the unit no problems. Vasquez was also insubordinate at times, repeatedly disobeying orders within the Hive to deactivate her weapon and, later, cease firing. While these actions unquestionably saved lives during the ambush, they also caused critical damage to the Atmosphere Processing Plant's cooling systems, and its subsequent meltdown almost claimed the lives of all the survivors at the colony.

Vasquez was very close to Drake, with whom she may or may not have had a physical relationship, and the two often trained together and encouraged each other in their disruptive behavior. Vasquez was devastated by Drake's death, to the point where she was apparently willing to give her own life in a suicidal and obviously futile attempt at saving him inside the Hive. Her grief over his death quickly developed into anger, which she largely directed at Gorman for his complete failure to command during the ambush.

Vasquez also shared a love/hate relationship with Hudson, whom she exchanged a friendly rivalry with. The two constantly quarrelled and exchanged insults, with Hudson usually firing the shots. Regardless, Vasquez and Hudson worked well as a team and would minimize bickering during serious situations.

Vasquez was outfitted with an M56 Smartgun, customised with the word "ADIOS" ("Goodbye") painted on the right side forward of the charging handle, as well as the associated M56 combat harness and Head Mounted Sight. On her harness' chest plate she had painted the phrase "El riesgo siempre vive", roughly translated as "The risk always lives",[11] while on the back of her tunic she had scrawled "LOCO".[12][13] Additionally, she had drawn what appeared to be an abandoned attempt at a skull on her tank top.[14]

After losing her Smartgun during the Hive ambush, Vasquez switched instead to a standard issue M41A Pulse Rifle, with which she was very proficient. As a sidearm, she carried a non-standard Smith & Wesson Model 39 with ivory grips in a cross-draw holster, which consisted of a leather case attached to a belt system.[15] She was also equipped with an ME3 Hand Welder frequently used for fortifying barricades or cutting through obstacles, and was qualified to use the standard M314 Motion Tracker.

The Marines being briefed.

"I only need to know one thing: where they are..."

Vaquez with her smartgun. 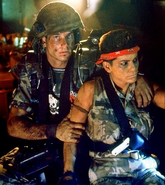 Behind the scenes image of Hudson and Vasquez.

Behind the scenes image of Vasquez and Hicks.

Vasquez, as she appears in Alien Trilogy 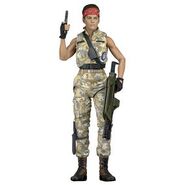 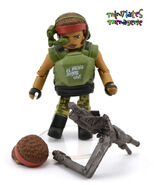