Dwayne Hicks
William James Remar (born December 31, 1953), known professionally as James Remar, is an American actor and voice actor who was originally cast as Corporal Hicks in the 1986 film Aliens. He was eventually replaced by Michael Biehn. Other notable films Remar has appeared in include 48 Hrs. (1982), Judge Dredd (1995), X-Men: First Class (2011) and Django Unchained (2012).

James Remar was cast as Corporal Hicks in Aliens. Alien series producer Walter Hill, who had previously directed Remar in The Warriors, The Long Riders and 48 Hrs., likely helped Remar obtain the audition for Aliens.[1]

Al Matthews (Sergeant Apone) was asked by director James Cameron to train the Marine actors. The main thing Matthews had to teach them was to never point a weapon at somebody and to never walk around with their finger on the trigger; although the weapons used blanks, they could still do damage. At the time of Aliens' filming, Frank Oz was filming Little Shop Of Horrors on an adjacent stage, and, according to Matthews, Remar "blew a hole in Frank's set! With a shotgun!" Matthews then said to Remar, "Where the fuck did you get live ammo?"[2]

Although not much is known about Remar's role as Hicks, as no direct footage of him in the role has ever been released, he at least filmed the shot where the Marines enter the Alien Hive and several still pictures[1] and a costume continuity Polaroid were taken of him.[4] It is unlikely any footage of Remar and Sigourney Weaver (Ripley) was filmed, as the scenes of the Marines in the Hive were done at beginning of Aliens' production; during this time, Weaver was finishing Half Moon Street.[1]

After a couple of weeks of working on Aliens, Remar was caught in the possession of illegal drugs[5] and was subsequently fired. Michael Biehn, who had previously worked with Cameron on The Terminator, playing Kyle Reese, was brought in to replace Remar.[1] According to Cynthia Dale Scott (Corporal Dietrich) at the 2011 convention Alien Encounters, the crew would not discuss Remar's departure with the others.[6]

"No one would talk about it, nobody told us, it just went away, and we showed up for the day and we looked at the call sheet and we're reading and we're going, 'Michael Biehn? Who's Michael Biehn?' and they said 'He's Hicks.' and we're all looking at each- I could- I could swear that James was Hicks, you- nobody ever said a word to us, it's just like 'We're reshooting a few scenes, this is Hicks.' and it- you know. It was supposed to be a big secret and nobody ever told us anything"
―Cynthia Dale Scott at the 2011 convention Alien Encounters[6]

With Biehn's arrival, Cameron and Biehn allegedly reworked the character of Hicks slightly, as Biehn was worried he may be compared to his previous role as Reese.[1] Despite the recasting, the footage of Remar entering the Hive with the other Marines is included in the final film; having already filmed a complex effects shot with him, the production were unable to re-film with Biehn in the role, and instead used editing to cut away once Remar turned his head.[1]

The cast and crew have remained "tight-lipped" about Remar's involvement and departure. The issue isn't given much weight or coverage, if any, in the Superior Firepower making-of documentary on the Alien Quadrilogy and Alien Anthology sets, and it is not discussed in interviews. The matter, if referred to, is usually brushed off as "creative differences", which makes the secrecy around Remar's involvement seem strange.[1]

The truth is, the silence of the cast and crew owes more to respect for Remar's privacy than for any unwillingness or inability to recall the events that led to him being replaced by Michael Biehn. Remar commented to Starlog magazine in March 1986, "[Aliens] was a four month commitment in a foreign country, which I was willing to make. Unfortunately, urgent matters at home required that I return to the States and attend to them. They got someone else, and I came home and took care of the problems, and moved on to Band of the Hand."[1]

It wasn't until recently, when Remar himself commented more explicitly on the issue, that the reason for his firing became clear: "I had a terrible drug problem, but I got through it... I had a great career and personal life, and messed it up with a terrible drug habit."[1] In an interview featured in episode 128 of the podcast SiDEBAR, Remar said of his Aliens experience, "I was initially cast as Corporal Hicks, and I was fired after a couple weeks of filming because I got busted for possession of drugs, and Michael Biehn replaced me."[5]

Remar also lost his credibility with Walter Hill. "Getting fired from Aliens alienated me from [Walter Hill] for twelve years," Remar explained, "he didn't hire me again for twelve years. And I know why – because I made him look bad. Y'know, it was fucked up."[1]

Remar and James Cameron on the Aliens set.[1]

Remar as Hicks. Note the plastic daisy pin on his helmet, which was later removed by Biehn.[8] 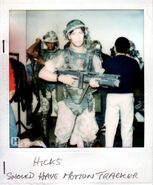 A costume continuity Polaroid of Remar as Hicks.[4] Note that his Pulse Rifle lacks a shroud and he lacks a Motion Tracker (which is noted).

Call sheet number 6, which features Remar's name.[9]
Add a photo to this gallery

Retrieved from "https://avp.fandom.com/wiki/James_Remar?oldid=260824"
Community content is available under CC-BY-SA unless otherwise noted.