J. Wallace[1] was one of the mechanics aboard the USCSS Prometheus during the ship's voyage to LV-223.

He was killed by the mutated Fifield during his attack in the ship's hangar bay.

When Janek noticed Fifield's monitor was outside the Prometheus' hangar door, a mechanic ordered Barnes to open the door. Barnes opened the door and the other mechanic went outside to inspect Fifield (who was infected by the black liquid found inside the Engineer Temple). The mechanic kicked Fifield's boot, but nothing happened. The mechanic then told Wallace to take a look at Fifield, but the mechanic was killed when Fifield smashed his helmet as Wallace watched in horror. Wallace fled and tried to get into the ATV NR6 in the hangar, but Fifield threw him off the platform and jumped on him, crushing his chest. The severely injured Wallace was finally killed when Fifield smashed his face with his clenched hands. 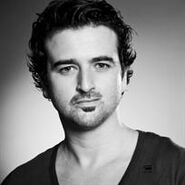 Actor Eugene O'Hare
Add a photo to this gallery

Retrieved from "https://avp.fandom.com/wiki/J._Wallace?oldid=234266"
Community content is available under CC-BY-SA unless otherwise noted.