"No matter what happens down there, I can't bring none of that shit back home with us. Can't let it happen. And I'll do whatever I have to to see that it doesn't."
―Janek (from Prometheus)

Idris Elba
Idris Janek[1] was the captain of the USCSS Prometheus during the ship's mission to LV-223. He died after he, Chance, and Ravel flew the Prometheus into the Engineer's ship in a successful attempt to stop it delivering the black liquid to Earth.

After their initial brief interactions (where she seemed to show little to no interest in him), Janek eventually asked Meredith Vickers if she was a human being, due to her cold attitude and demeanor. Taking this as a sort of challenge, Vickers accepted and told him to meet her in her quarters, where she presumably let him examine and run tests on her female anatomy.

He rightly surmised that the purpose of the black liquid found on LV-223 - which had already led to death of several crew members - was to exterminate the human race.

After Shaw contacted him and let him know the surviving Engineer’s intentions, she implored him to stop them by any means. Janek accepted this final mission and turned his ship into a weaponized projectile, shooting down the Engineer’s ship and killing himself (and his fellow crew mates who refused to abandon him) in the process.

Janek is uninterested in what the domes contain, but he does care about the safety of the people on board. After finding out what the bacteria inside the urns can do, he tells Shaw to make sure nothing is brought back to Earth, while he agrees to Shaw's suggestion that, if she fails, he also shall do anything on his part to do so. Once Shaw warns the Prometheus that the Engineer has started his ship and has set course for Earth to kill all humans, Janek sacrifices himself by crashing Prometheus into the alien ship, successfully stopping it. His co-pilots decide to stay on board with him even after he tells them to go to the escape pods, demonstrating their loyalty as they go down together.

Janek on the bridge. 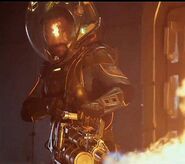 Janek in his space suit burning the mutated Fifield with a flame unit.