Elba has won a Golden Globe, and has been nominated for a further two Golden Globes and three Emmys. 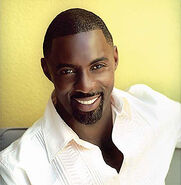 Elba as "Stringer" Bell in The Wire.

Elba as DCI Luther in Luther.
Add a photo to this gallery

Retrieved from "https://avp.fandom.com/wiki/Idris_Elba?oldid=253810"
Community content is available under CC-BY-SA unless otherwise noted.