Holm was nominated for an Academy Award for Best Supporting Actor (for Chariots of Fire), and won two BAFTAs. He had a long history of appearing in adaptations of Shakespeare plays, both on stage and on-screen. In 1998, Holm was knighted by Queen Elizabeth II at Buckingham Palace for his "services to drama". 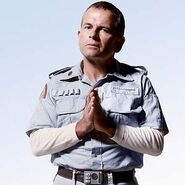 Iam Holm as Ash.
Add a photo to this gallery

Retrieved from "https://avp.fandom.com/wiki/Ian_Holm?oldid=258966"
Community content is available under CC-BY-SA unless otherwise noted.