Male
Hornhead, also known as Champion[1] was the strongest warrior of a Yautja clan located on the planet LV-797. He was killed by Ahab in a duel on LV-223 to earn the clan's trust.

Hornhead is notable for his maroon-colored skin as well as his ridged bio-helmet that showcased his horns.

Hornhead's clan arrived on the planet Tartarus during an unknown period and discovered an Engineer vessel present. Wanting to salvage the ship's contents for themselves, the tribe guarded the vessel from anything that threatened their hold on their find, as well as anyone that trespassed on their grounds.

Hornhead makes a brief appearance among a group of Predators when they surround marine Rucker, only to be sent into a retreat. He is also seen among numerous Predators to ambush Captain Paget's squad of marines when they attempt to flush the hunters out with their motion trackers.

Hornhead makes a full appearance when it is revealed that the Predators had boarded the marine ship Hasdrubal soon after arriving at the moon LV-223 and killed everyone on-board, including Lorimer and Laurence Goode.

The clan later lands on the moon and tracks down the marines, who were holding out in an Engineer temple. The Predator Ahab who had sided with the marines, confronts the leader and the two stare each other down. The leader summons Hornhead, the tribe's strongest warrior, and he and Ahab begin battling. If Hornhead wins, they get the temple. If Ahab wins, he becomes the new clan leader. Ahab eventually comes out on top, killing Hornhead.

Hornhead as he appears on Predator: Life and Death #3. 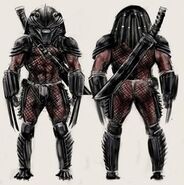 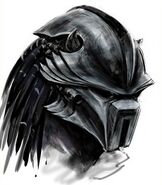 NECA figure of Hornhead.
Add a photo to this gallery

Retrieved from "https://avp.fandom.com/wiki/Hornhead?oldid=245566"
Community content is available under CC-BY-SA unless otherwise noted.