"Ricardo. They're all here."
"Who?"
"Everyone that's missing. Everyone. They're trapped in some kind of nest. There are eggs. It's... It's like a farm..."
―Amanda Ripley and Ricardo, regarding the Hive (from Alien: Isolation)

The Hive on Sevastopol Station was established in the station's engineering section in 2137 by the Xenomorph birthed from Catherine Foster. The Hive consisted of many Drones, Facehuggers and Ovomorphs, but only one Drone was active for most of the time outside of the hive's quarters, seeking more hosts to harvest.[citation needed]

"There are emergency overflow circuits that feed excess power into the local capacitor banks on each tower. If I decouple them and discharge the system, the purge will be external. The nest is right in harm's way."
―Amanda Ripley to Ricardo, regarding her plan to destroy the Hive (from Alien: Isolation)

Most of the Hive was eventually destroyed by Amanda Ripley when she initiated a reactor purge by powering up the reactor cores and overloading them, although multiple Drones managed to escape. Ripley later discovered another small Hive that was recently created with Ovomorphs and Facehuggers in another part of the station. Due to how recent the nest is, it lacks any hosts with the exception of one or two victims but most of the eggs are open, indicating that the Facehuggers that are freely roaming the station, came from this nest.

The entrance to the Hive.

A former Engineering station inside the Hive.

One of the many cocooned victims in the Hive.

Concept art of the hive. 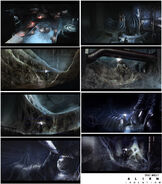 Retrieved from "https://avp.fandom.com/wiki/Hive_(Sevastopol)?oldid=237966"
Community content is available under CC-BY-SA unless otherwise noted.