"Hudson? I'm not making that out too well, what is it?"
"You tell me, man, I only work here."
―Lt. Gorman and Pvt. Hudson, upon discovering the Acheron Hive (from Aliens)

The Hive, also known as the Nest, is the nesting ground of a Xenomorph Queen, constructed from Hive resin, a gelatinous fluid secreted by Drones or Workers. It is where the Queen will reside while she is laying Eggs, a state that renders her immobile, and is where those Eggs are subsequently stored. Potential hosts captured by other Xenomorphs are brought to the Hive and cocooned to the walls — a process sometimes referred to, particularly by Colonial Marines, as being "hived" [1] — to be implanted with Chestburster embryos.

"Visibly damp and lustrous in spots, the peculiar material that had been used to construct the addition resembled a solidified liquid resin or glue. In places light penetrated the material to a depth of several centimitres, revealing a complex internal structure. At other locations the substance was opaque. What little color it dispalyed was muted: greens and grays, and here and there a touch of some darker green."
―Aliens novelization, chapter 7

Hives are built from a clear, gelatinous resin that Xenomorph Drones vomit from their mouths[2] and eventually hardens to form a dark, strong, resinous substance, also referred to as "webbing".[3] This resin is used to construct a warren-like maze of tunnels spreading outwards from a central Egg chamber,[4] where the Queen will reside, and also to cocoon potential hosts to the walls, immobilizing and restraining them so that they can be impregnated with a Chestburster. It should be noted that while a Queen is typically found overseeing a Hive, one is not necessarily required for a Hive to form. Indeed, construction of a Hive may be a precursor to Queen development in many cases. In this respect, a Xenomorph Hive shares similarities in its architecture with both spider webs and wasp nests, while being directly comparable to neither.

The atmosphere within a Hive is typically very warm. A Queen will often locate her Hive in an area where these properties are already apparent, such as large industrial facilities where there is an abundance of ambient heat.[5][1] It is also possible the Hive structure, or perhaps the resident Xenomorphs themselves, somehow raise atmospheric temperatures within the Hive to meet this requirement.

One of the most notable features of a Hive is the restraint of any captured host organisms by cocooning them to the walls of the nest. When cocooned in this way, hosts are enveloped in resin which, when hardened, prevents them from escaping or otherwise interfering with the Chestburster implantation process. While such restraint is comprehensive, the head and neck are generally left free, to allow a Facehugger to subdue the victim.[4] It is not unknown for hosts to be mutilated in order for them to "fit" into the Hive structure.[6] Xenomorphs have also been known to use their resin to seal any potentially life-threatening wounds suffered by the host during the capture process,[7] stemming blood flow and thereby ensuring the individual's survival long enough to serve as a successful host.

After the host has served their purpose, no effort is made to remove them and their corpse is generally left in place to rot,[5][8] although there is at least some evidence that the Xenomorphs may use the bodies as a food source.[6]

Hives can vary in size from extensive nests with hundreds of members headed by an Egg-laying Queen to small chambers occupied by only a few Drones or Warriors. Occasionally, in larger infestations, smaller "satellite" Hives will be set up in the areas surrounding the main nest. While these subsidiary Hives are occasionally used for the cocooning and impregnating of hosts, more often they are simply an outlying base of operations for Xenomorph Warriors.[1] Even individual Xenomorphs operating in isolation have been known to establish small nests,[9] although this is thought to be rare as a solitary creature has little need for a Hive of its own. The largest known Hive ever discovered is that on Xenomorph Prime, which covers half a continent.

The size of a Hive is thought to be related to how many Queens it holds. It is known that larger hives may have several Queens and that the chiefest among them may be ruled by an Empress or Queen Mother.

Hive nodes create the Alien life web. Drones carry dormant hive nodes in their stomachs and using a gag reflex, release hive nodes on walls and on the ground. Once deposited the node uses up available organic materials from plants, carcasses, and even microorganisms to produce the hive's structure. This demonstrates the species' complete hostility toward all life forms. The life web slowly destroys the natural ecosystem of entire planets. If not in a fight an Alien can stand near a hive node and heal itself, making hive nodes a very valuable asset when infesting a planet. (Aliens versus Predator: Extinction)

A Hive was originally seen in Alien, when the Alien on board the Nostromo set up a nest in the ship's hold where it was converting its victims into new Eggs. However, this scene was ultimately cut from the theatrical release of the film, and consequently the first appearance of a Hive on film was in Aliens. The scene from Alien was reinstated in the 2003 Director's Cut.

Below is a list of notable Hives seen in various media from the Alien franchise.

The Hive scenes in Aliens were filmed at Acton Lane Power Station in West London. The Hive itself was first sculpted in clay and then molded in latex and fiberglass pieces.[10] The set's construction was overseen by Peter Lamont.[11] While Acton Lane was being cleaned for asbestos, Lamont's effects team spent three weeks painting the individual Hive pieces, before they were transported to the now prepared power station and assembled.[10] The further three weeks set aside for construction proved just barely sufficient; while shooting was taking place on the lower floors, the upper floors were still being built. According to Lamont, "As Jim [Cameron] came up shooting, we were gradually retreating behind."[10] The cocooned victims trapped in the Hive were mostly portrayed by sculpted dummies with faces cast from actors.[10] 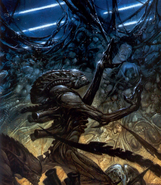