"As bad as you are, those things are worse."
―Mombasa to Walter Stans (from Predators)

The Hell-Hound,[1][2] also known as the Predator Dog[citation needed], is an aggressive dog-like extraterrestrial species used by the Super Predators as a hunting tool.

Tracker used a pack of Hell-Hounds during his Hunts on the Game Preserve Planet.

Hell-Hounds are used by the Super Predator Clan to flush out their prey, the same way as a hunter would use dogs to flush out their quarry. The Hell-Hounds are controlled by the Tracker Predator. The Tracker has a whistle device that is used to call the hounds back to their master to prevent the Hell-Hounds from doing too much damage and killing the prey. If this were to happen, the Super Predators would have no prey to hunt. It was stated by Robert that the reason the "dog handler" has armor on his legs and the armor on his arms are because of the large horns and spikes that are present on the Hell-Hounds. They have a high pain tolerance and they are also very resilient, as evidenced by the Hell-Hounds' surviving many gunshot wounds which would be fatal to creatures from Earth. Several shots are required to take them down or possibly hit their vital organs. They can even survive being shot with a weapon like an M134 Minigun, and remain standing for a good amount of time. On the Game Preserve Planet, Russian soldier Nikolai Fedorov used at least a few hundred rounds from his minigun on just one hound, eventually killing it, but not before wasting ample ammunition.

Despite being called dogs or hounds, Hell-Hounds appear to be therapsids (primitive, reptilian-looking ancestors of mammals); they have scales and have an almost ankylosaur-like appearance, but look vaguely canine at the same time. They also resemble the Predator Hounds used by the Upgrade Predator.

Hell-Hounds bear resistance against the acid blood of Xenomorphs, as during a Xenomorph Hunt, the Tracker's Hell-Hounds "did not leave a shred of the prey intact".[3]

A Hell-Hound being gunned down.

A Hell-Hound on the move.

Concept art of a Hell-Hound. 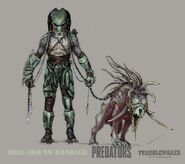 Tracker and a Hell-Hound. 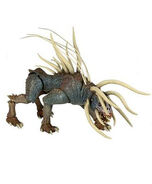 NECA figure of a Predator Hound. 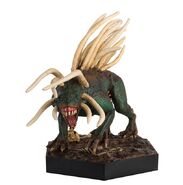 Eaglemoss Collections figurine of a Hell-Hound.

Minimates figure of a Predator Hound.

Hiya Toys figure of the Hell-Hound.