"Drake, check your camera. There seems to be a malfunction."
[Drake hits camera]
"That's better. Pan it around a bit... Good."
―Pvt. Drake and Lt. Gorman, regarding the camera on Drake's HMS (from Aliens)

The Head Mounted Sight (HMS),[2] also known as the Helmet Mounted sight,[1] was a headset-like device worn by the operator of an M56 Smartgun.[2] Incorporating an eyepiece, camera and microphone,[3] the HMS allowed users to see targets detected by the Smartgun's infrared tracker.[4]

The Head Mounted sight was one of the 4 major components of the M56 Smartgun, the other being the M56 combat harness, stabilized articulation arm and the gun itself.[2] The right side of the band of the HMS incorporated a tactical camera,[3] which could transmit video to one of the monitors in an M577 Armored Personnel Carrier,[5] and a posable[5] eyepiece with screen, while the left side of the band featured a boom microphone.[3]

When the infrared tracker mounted above the M56 Smartgun's barrel detects a target, it will flash a red Moving Target Indicator (MTI) light in the headset's eyepiece.[6] A small video screen beneath the MTI light relays images from the headset's tactical camera, and when the camera is pointed at the gun's target, the tracking system will overlay a set of cross-hairs, in the form of a lighted box or rectangle, onto the screen over the target's centre of mass.[6] At the same time, the articulation arm self-steers the gun to aim at the target, and, as soon as it had done so, a target lock circle lights on the screen to indicate that the target was boresighted.[4] In the case of multiple targets or infrared false-target decoys appearing in the sight, the operator can simply steer the lighted box to bracket whichever target they actually wish to engage.[4]

To use the HMS, it must be plugged it into the tracking and comms system in the M56 combat harness.[2]

The Head Mounted Sights used in Aliens were modelled after contemporary helicopter pilot sights.[8] The props themselves were made by Pinewood Studios' Otter Effects,[9] who made the majority of the Marine equipment for the film,[10] out of metal and cast plastic pieces.[11] The base of the headset is a Beyerdynamic Headmicrophone HM 560 headset with M 560 microphone,[7] while the "knuckle"[12] of the screen arm is part of an Olympus OM T28 Macro Twin Flash 1 with a blue, circular part from the hinge of a Vivitar 2500 Zoom Thyristor Electronic Flash on it. The output connector is a Neutrik NCLNECF connector.[7] The eyepiece features a miniature TV screen and a small hole to facilitate stereoscopic vision for the actor.[10] The camera on the headset is smaller and has different detailing than the cameras on the standard Marine helmet.[10]

While only 1 of the headsets made for Jenette Goldstein (Private Vasquez) is known to have survived filming[10] and was sold by the Prop Store (missing a piece on the microphone and with some residue from Goldstein's makeup still on the temple foam cushions),[11] 2 of the ones made for Mark Rolston (Private Drake) are known to have survived,[10] with one in the possession of Alien prop collector Harry Harris[12] (with a reproduction microphone boom).[13] 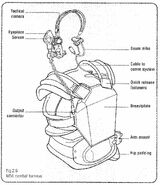 A diagram of the HMS and M56 combat harness.[3]

A behind the scenes picture of the front of Private Drake's HMS.

The back of the HMS.
Add a photo to this gallery

Retrieved from "https://avp.fandom.com/wiki/Head_Mounted_Sight?oldid=252005"
Community content is available under CC-BY-SA unless otherwise noted.