"It's what we call a 'shake and bake' colony."
―Van Leuwen to Ripley, regarding Hadley's Hope (from Aliens)

Aliens: Colonial Marines
Hadley's Hope was a human terraforming, research[1] and mining[2] colony that was established by the Weyland-Yutani Corporation on Acheron (LV-426) in 2157.[3] The settlement was co-financed by Weyland-Yutani and the Extrasolar Colonization Administration, and by 2179 it sustained a population of 158 colonists. The colony was subject to a major Xenomorph infestation which ultimately resulted in its destruction.

Hadley's Hope was established by the Weyland-Yutani Corporation on Acheron (LV-426) in the year 2157. The colony was largely assembled from pre-manufactured modular structures that were installed on the moon's surface, for ease and speed of construction. At least part of the colony's living areas were assembled from materials recycled from the first starships that brought colonists to LV-426.[4]

As a terraforming colony, Hadley's Hope's main function was ensuring the continued operation and maintenance of the nearby Atmosphere Processing Plant. Named after its founder, Curtis Hadley,[5] the colony itself was fairly small, home to some 158 Weyland-Yutani workers and their families and overseen by administrator Al Simpson. Despite the now-breathable atmosphere created by the Atmosphere Processor, the planet's surface continued to be ravaged by strong winds and electrical storms, and as a result most of the colonists tended to remain indoors.

The complex itself was centered around the operations center and featured a small medical facility in the main building and a bar for recreation in one of the outlying structures. There were also garage facilities for maintaining the colony's fleet of Daihotai Tractors and other vehicles. To offer some protection from the ferocious weather, a large storm wall was built to shield the colony — however, as the winds only ever blew from the same direction, the wall was only built along one side of the complex.[6] The colony was linked directly to the Atmosphere Processor by means of an underground tunnel that allowed travel between the two locations without having to venture into the storms outside.

Shortly after the establishment of the colony, Weyland-Yutani sent in a scientific research team consisting of Dr. Bartholomew Reese, Dr. Elena Hidalgo and Dr. Mori to be stationed at the colony. On March 15, 2173, the colony welcomed its first newborn on the moon in the form of Rebecca Jorden, nicknamed "Newt."

Following Ellen Ripley's rescue from deep space, Weyland-Yutani representative Carter Burke contacted Simpson with orders to investigate the co-ordinates Ripley had provided for the location of the derelict Engineer spacecraft, although he withheld the nature of what the colonists were likely to discover. Simpson subsequently dispatched Newt's parents, prospectors Russ and Anne Jorden, to investigate the ship, wherein they discovered thousands of Xenomorph Eggs. Russ was immediately impregnated by a Facehugger.

Russ was returned to the colony's med lab, while a second team dispatched to investigate the derelict was also subdued and impregnated. Some twenty-four hours after he was first attacked, the Chestburster inside Russ hatched.[7] The creature, along with the Xenomorphs born from the second team, soon began abducting more colonists, moving them to the Atmosphere Processor where they had begun to construct a Hive. An armed team sent in to find and rescue the missing colonists was quickly overwhelmed and used as yet more hosts.[7] Conditions deteriorated early in the fighting when the link to the colony's communications uplink was severed, leaving the inhabitants unable to call for assistance.[8]

With the situation spiraling out of control, many survivors found themselves holed up in various parts of the colony, constructing barricades from scrap metal and sealing doors in an attempt to keep the Xenomorphs at bay. However, the entire colony was soon overrun and virtually all of its inhabitants either killed or used as hosts, save for several individuals who managed to escape on the few available ships at the colony, including Captain Brackett, Dr. Mori, Lieutenant Paris and young colonist Luisa Cantrell, who fled aboard a Weyland-Yutani shuttle; and Derrick Russell, Genevieve Dione, Nolan Cale and several other colonists, who escaped aboard the cargo freighter Onager. The only survivor left at the colony was Newt, who had managed to evade capture within the settlement's ventilation system. Evidence was later found that even in the early stages of the outbreak, active research into the Xenomorphs was being carried out at the colony.

With all contact with Hadley's Hope lost, the United States Colonial Marine Corps dispatched a ship, USS Sulaco, to investigate. Upon arrival, the Marines found the colony damaged and deserted, and soon discovered Newt hiding within the ventilation system in the operations building. After tracking the other colonists to the Atmosphere Processing Plant, the Marines moved in to investigate, but were quickly overwhelmed or killed in the ensuing chaos. When attempting to extract the survivors, the crew of their dropship was killed by a Warrior that had snuck on board, causing the ship to crash. With no way to evacuate, the survivors subsequently took up refuge in the operations center, setting up sentry guns to help defend the area.

While the survivors of the incident — now reduced to three humans and a synthetic — were ultimately able to escape, the Atmosphere Processor was badly damaged and eventually went into meltdown, exploding with the force of a thermonuclear weapon. While some of its structures remained standing, the colony was essentially destroyed, and the Hive inside the Atmosphere Processor was obliterated with the loss of many of the Xenomorphs there. Weyland-Yutani would go on to blame the Union of Progressive Peoples for the destruction of the site, citing that they nuked it from orbit.[9]

"There's a colony called Hadley's Hope not too far from here -- well, what's left of it."
―Capt. Cruz to a team of surviving Marines

Another unit of Colonial Marines, aboard USS Sephora, was subsequently dispatched to LV-426 to investigate the loss of the Marines from Sulaco. When Sephora was destroyed in orbit, they too were forced to seek refuge within the ruins of Hadley's Hope, now ridden with a second Xenomorph infestation and battered further by debris from Sephora raining down on it. In a repetition of earlier events, the Marines were all but overrun as a Second Acheron Queen had emerged as they attempted to make their escape, and only a few survived the ordeal to successfully evacuate LV-426.

Following the loss of the colony, ICC Executive Paul Van Leuwen launched an inquiry into the incident in 2180, and could frequently be seen at Anchorpoint Station as he furthered his investigations into the events on LV-426.[10]

Several years after the incident, Xenomorphs that had not been obliterated in the destruction of the colony managed to establish a new hive in the while Weyland-Yutani reprogrammed synthetics to capture Alien specimens to repurpose them as bioweapons. Two Marine squads from USS Diomos were dispatched to the colony to investigate. After fighting their way through the colony's defective defenses, Weyland-Yutani's synthetics, and swarms of Xenomorphs, they ended up in the Queen's Hive. The Marines armed a nuclear explosive device to destroy the colony, annihilating it once and for all.[11]

The colony was designed by Ron Cobb from preliminary sketches by James Cameron. Cobb conceived that the colony would be broken into three districts: the main complex, the "frontier town," and the Atmosphere Processing Plant, all surrounded by a storm wall. Full-size, 1/6, and 1/50 scale sets were built for various shots. Cobb designed most of the colony with modules that could be added and rearranged as the population grew.[20]

Much like the Nostromo set in Alien, the colony interior (consisting of the operations room, med lab, connecting passageways and main corridor) was entirely interconnected and built as one contiguous set.[21] Repetition in construction was key, especially in the lengthy main corridor, and to this end the production was able to purchase rejected products from a nearby injection molding company to use as set dressing. The main corridor walls are largely built from the rear panels of CRT televisions.[21] The banks of computers seen in the main operations room were sourced from British Airways, who were upgrading their ticketing systems at Heathrow Airport at the time. After selling the gold content (the only parts of the mainframes worth recycling), British Airways gifted the computers to the film crew, with the additional bonus that they did not need to return them — allowing them to be destroyed with pyrotechnics during the major Xenomorph assault scene.[21]

The colonist's typically bright clothing, most noticeable on extras working outside in the extended Special Edition of the film, was chosen specifically by Cameron for practical reasons — people working outside on a moon with such a dark and turbulent atmosphere would wear bright clothing so that, should they become lost, they would be easier to locate against the generally dingy background.[22]

The 1/6 scale miniature of Hadley's Hope was constructed over an entire soundstage at Pinewood Studios[20] and measured some 90 feet in length.[23] As well as the structures, a myriad of miniature vehicles were built to fill out the settlement. 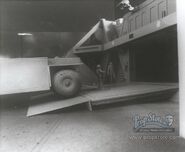 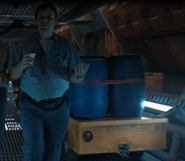