Giger's Alien
Hans Rudolf "Ruedi" Giger (February 5, 1940 – May 12, 2014) was an Academy Award-winning Swiss surrealist painter, sculptor and set designer[1] who designed the Alien creature, for the 1979 film Alien. His initial design has since been adapted, modified and re-envisioned by others (and himself) for the subsequent movies, video games and other media of the Alien, Predator and Alien vs. Predator franchises. Giger also wrote co-directed the 1979 documentary Giger's Alien with J. J. Wittmer and wrote the book Giger's Alien.

As well as the original adult Alien, Giger also designed the derelict spacecraft, Facehugger and Egg in Alien, and later worked on designs for the Alien, "Aquatic Facehugger", Chestburster and Alien skin in the 1992 film Alien3 (although these designs were ultimately rejected) and the murals seen inside the Engineer Temple in the 2012 film Prometheus.[2] Other notable films Giger worked on include Species (1995).

For his work on Alien, Giger won an Academy Award for Visual Effects (shared with Carlo Rambaldi, Brian Johnson, Nick Allder and Dennis Ayling).[3][4] He is primarily known for his disturbing, "biomechanical" style. He was inducted into the Science Fiction and Fantasy Hall of Fame in 2013.[5][6] On May 12, 2014, Giger died in a hospital in Zürich, Switzerland after having suffered injuries in a fall at the age of 74.[1][7][8][9] 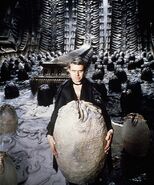 H. R. Giger behind the scenes of Alien 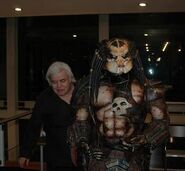 H. R. Giger with a Predator

1976 painting Necronom IV by H.R. Giger, which served as the inspiration and basis for his design of the Alien in the film Alien.
Add a photo to this gallery

Retrieved from "https://avp.fandom.com/wiki/H._R._Giger?oldid=253734"
Community content is available under CC-BY-SA unless otherwise noted.