Grace was Kleist's secretary at the Charon Base research facility, first seen attempting to inform him of a Grave Robber whilst he looks at his failed Queen experiments.

Angered by Choi's unjust death, sergeant Green storms towards Kleist's office, and threatens Grace. Grace herself, after a brief fight, is easily able to overpower and subdue Green, with Kleist entering to further infuriate Green by relieving him of duty.

Grace is with Kleist moments before the Rogue breaks out of containment. Grace manages to tackle Kleist to the floor as the creature escapes into the depths of the facility. Grace is about to initiate a Red-Alert but it promptly stopped by Kleist, wishing to personally observe the battle between the Rogue and a rival Queen.

After realizing that the Rogue is losing the fight, Kleist orders Grace to kill the Queen. Brandishing a Kramer assault rifle, she unloads into the beast but is promptly impaled and decapitated.

Though mostly emotionless, Grace possessed a dry sense of humor and enjoyed teasing the professor with her perceived lack of humanity.[2] She was the only individual whom Kleist would strike up personal conversations with, and he would reveal a more anxious, unhinged side to him. She herself would usually be at the forefront of his megalomaniacal rants and seemed unimpressed by his rambles.

Grace displays her superior strength, even against Sergeant Green. 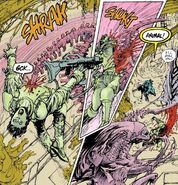 Grace's destruction.
Add a photo to this gallery

Retrieved from "https://avp.fandom.com/wiki/Grace?oldid=212073"
Community content is available under CC-BY-SA unless otherwise noted.