Gardiner was a member of the Office of the Colonial Marshals on Sevastopol Station. When a lone lone Xenomorph was unleashed on the station by the crew of the USCSS Anesidora in 2137, Gardiner and his fellow officers struggled to keep order.

Gardiner was killed through unknown means whilst planting a package of explosives in Seegson Synthetics.

During the Xenomorph infestation, Gardiner was sent out to Seegson Synthetics by Waits to plant a package of explosives to be used against the Drone that was terrorizing Sevastopol's inhabitants. Whilst exploring the facility, Gardiner was killed through unknown means before he could plant the explosives.

Soon after losing contact with Gardiner, Waits (unaware of the officer's fate) contacted deputy Ricardo and informed him that Gardiner was not "checking in". He sent Ricardo to Gardiner's last known location to evaluate the situation. After arriving at Seegson Synthetics, Ricardo discovered Gardiner's corpse and took over his role by taking the explosives and planting them in the area. 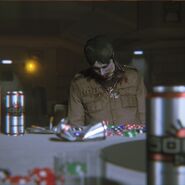 Gardiner's corpse.
Add a photo to this gallery
Retrieved from "https://avp.fandom.com/wiki/Gardiner?oldid=247065"
Community content is available under CC-BY-SA unless otherwise noted.