The Flying Queen is a part of the Aliens toy line produced by Kenner Products.

In the Aliens: Space Marines series the Queen appears as a large blue Xenomorph with a large set of wings riddled with holes as well as a pair of normal arms, large talons for feet, a highly developed axe-like tail and axe-shaped crests protruding from her carapace, this design is based on the Kenner figure.

In Aliens: Night Strike, the Flying Queen is seen grabbing ATAX who is wearing an exoskeleton modeled after a Queen, she then carries him off. Bishop then theorizes that the Queen thought she was rescuing a fellow Queen.

In Aliens: Swarm, it is revealed that ATAX had killed the Flying Queen with the help of his Bio-Boost Armor.

The Flying Queen in Operation: Aliens was black in coloration, with large avian-like talons used for snatching prey. She had membraned wings, a pair of regular arms and a pair of vestigial arms and a membraned tail like a bat and her crest had a row of blunted spikes running down their length.

In Aliens: Armageddon, the Flying Queen is physically mostly similar to the one from Operation: Aliens however, it lacks the pair of normal arms and possesses a normal bladed tail instead of a membraned one, her crest was also much smoother. This Flying Queen was shown to be aggressive towards normal Xenomorphs, even killing a normal Queen or possibly Praetorian (though this could actually be the opposite as the most numerous Xenomorph enemies are brown in color while the flying Xenomorphs are the normal black color). 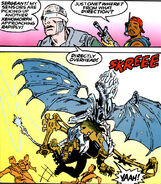 The flying Queen from the Kenner comics. 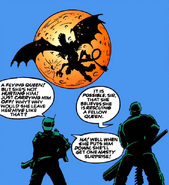 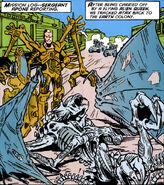 The flying Queen from the Operation: Aliens trading cards.

Out of packaging.
Add a photo to this gallery
Retrieved from "https://avp.fandom.com/wiki/Flying_Queen?oldid=255033"
Community content is available under CC-BY-SA unless otherwise noted.