"I mean, most animals retreat from fire. Yes?"
"Fire, yeah. Parker, can you rig, uh, three or four incinerator units?"
"Give me about 20 minutes. I'll do it."
―Ash, Dallas and Parker, discussing the use of Flame Throwers against the Alien (from Alien)

USCSS Nostromo crew[2]
The Flame Thrower,[1] also known as the incinerator unit, was a flamethrower custom-built by Dennis Parker.[2] Like the M240 Incinerator Unit,[3] the Flame Thrower fired ultra-thickened napthal at an effective range of 30 meters.[1]

In June 2122,[4] Flame Throwers were used by the crew of the USCSS Nostromo to combat the Alien.[2] All Flame Throwers aboard the Nostromo were destroyed when the ship's self destruct system detonated.[2]

Like the M240 Incinerator Unit used by the United States Colonial Marine Corps,[3] the Flame Thrower fired pressurized, ultra-thickened napthal ignited by the Flame Thrower's nozzle burner at an effective range of 30 meters.[1] The Flame Thrower had maximum burst of 20 seconds.[1] The weapon was 88 centimeters long and weighed 2.7 kilograms,[1] the same length and weight as the M240 with a full reservoir.[3]

"Rigging" (assembling or setting up) 3 or 4 Flame Throwers apparently took about 20 minutes.[2]

After a Xenomorph Chestburster emerged from Thomas Kane aboard the USCSS Nostromo in 2122, Samuel Brett was killed by the fully grown Drone when the crew went searching for the creature. Arthur Dallas concluded the creature was using the ship's ventilation ducts to move around and proposed a plan to flush it into the main airlock, at which point it could be jettisoned into space. Ash suggested that, since it worked on animals, fire might work to force the Xenomorph to retreat and Dallas ordered Dennis Parker to "rig three or four" Flame Throwers, who told him it would take "about twenty minutes". Once the Flame Throwers were ready, Dallas went into the ducts armed with one, while Parker, also armed with one, stayed behind with Joan Lambert, who was operating a tracking device. Dallas fired the Flame Thrower occasionally, but was eventually caught by the Drone, dropping his weapon.[2]

"How are our weapons?"
"The weapons are fine. This one needs refueling."
―Ripley and Parker, referring to their Flame Throwers

Parker later retrieved Dallas' Flame Thrower and placed it down on the mess hall table on A Deck, before picking the weapon back up and then leaving the rest of the crew to refuel it.[2]

After Ash was discovered to be a synthetic sleeper agent by the crew, Parker used his Flame Thrower to incinerate his remains. Parker then took the Flame Thrower with him when he and Joan Lambert went to B Deck gather sufficient coolant for the life support systems of the Narcissus, which the rest of the crew planned to flee the Nostromo with. Ellen Ripley stayed behind on A Deck with another Flame Thrower. The Alien eventually encountered Lambert and Parker tried to fire his Flame Thrower at the Drone, but refrained from doing so for fear of catching Lambert in the crossfire. He instead dropped his Flame Thrower and grabbed a hook, attempting to charge the creature, but was quickly overpowered. The Xenomorph then killed Parker, before killing Lambert as well.[2]

In the novelization of Alien, the crew corner the Alien in a food store, and Dallas fires at it with his Flame Thrower, chasing the creature into the ship's ventilation ducts.

In the Alien Director's Cut (perhaps the most famous deleted scene reinstated in the cut), as Ripley is trying to escape the Nostromo after activating the ship's self-destruct system, she discovers Brett (who is being turned into an Egg) and Dallas, the latter of whom is still alive, cocooned and being turned in a Hive created by the Alien. Dallas begs Ripley to kill and him and she complies, using a Flame Thrower to incinerate Dallas and Brett.[5]

The flamethrowers seen in the film were designed by production designer Roger Christian.[7] According to Phil Rae, either Martin Bower or Bill Pearson did the detailing on the Flame Thrower[6] (it is believed Bower did the detailing).[8]

The large raised section on the front of the Flame Thrower is the result of a large (compared to modern lighters) electronic gas lighter with a U2 battery (more commonly known as a D battery) being used to create the pilot light. A remote switch was used to turn on the lighter inside the Flame Thrower. Once the Flame Thrower was lit, director Ridley Scott "liked to keep it that way".[9]

Although many of the parts used to make the Flame Thrower remain unidentified, the two rectangular pieces with two rectangular holes in them (each) located near the front of the right side of the Flame Thrower are from Hornby Railways piers kits,[10] and can be found in at least R.654 and R.655 sets; it appears the piece in front of the two pieces is made with half of the Hornby part. Also, it is possible the the red tank and yoke attached to it are from a French Fenzy buoyancy compensator.[11] Additionally, the strap found on some Fenzys is very similar to the one used by the Flame Thrower. The pipe on the right side of the Flame Thrower appears to be the same kind used on the Nostromo model.[8][12]

At least Sigourney Weaver (Ripley) test-fired the Flame Thrower (presumably before using it on set) on the lawn at Shepperton Studios' backlot.[13]

The use of the Flame Thrower in Alien began something of a tradition in the Alien franchise of flamethrower weaponry featuring in the films — Aliens would prominently feature the M240 Incinerator Unit, Alien Resurrection would feature the Draco Double Burner and Prometheus would also feature a flamethrower. Despite not featuring flamethrowers, the prisoners in Alien3 also used fire as a weapon against the Dragon.

In the Aliens: Colonial Marines multiplayer map Nostromo, an M240 Incinerator Unit can be found next to 2 tracking devices on the same table where Parker lays down Dallas' Flame Thrower after recovering it from the vents in Alien. This was likely done as a reference to the film.

Ripley with the flamethrower as she heads for the escape shuttle.

Ripley puts the cocooned Dallas out of his misery. 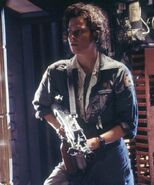 Ripley with the Flame Thrower in a promotional image. 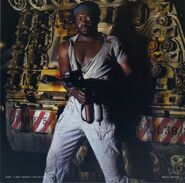 The Flame Thrower's page in the Fox Store's The Alien Legacy page. Note that some parts of the page are broken. 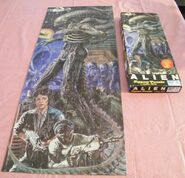 Ripley and Parker armed with Flame Throwers (bottom left) in an Alien puzzle.

A screen-used, non-firing Flame Thrower prop from Alien auctioned by Profiles in History.[15]

The Prop Store setting up their SDCC 2013 booth. Weaver's Flame Thrower prop can be glimpsed in the bottom of the cabinet.[19] 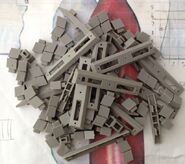 The Hornby piers part used on the Flame Thrower (top of the pile).[10] 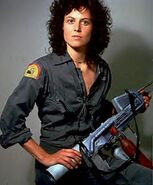 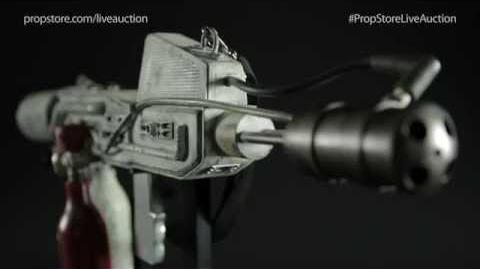 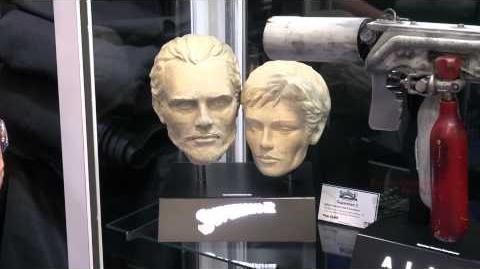