"The surface of Fiorina was as barren as its sky, a riot of gray-black stone scoured by howling winds. A few twisted, contorted growths clung to protected hollows in the rock. Driving rain agitated the surface of dank, cold pools."
―Alien3 novelization, chapter 1

Humans
Fish
Rampant insect life
Fiorina 161, nicknamed "Fury", was a barren, windswept world in the Neroid Sector,[1] orbiting around a binary star system. The planet's exact location was kept classified by the Weyland-Yutani Corporation for security reasons. Its position could be estimated to 19.5 light years from Earth, just outside the border of the Galactic Nucleus.

Fiorina 161's surface was barren, rocky and brownish-gray, much like the similarly bleak LV-426. The planet experienced extreme temperatures which ranged between 40°C in daylight to -20°C at night (+104°F to -4°F).[2] This was likely due to its location in a binary star system. The planet's atmosphere was breathable to humans, and it possessed ample liquid surface water in the form of large oceans, which was likely why the atmosphere had a considerable amount of oxygen. However, these water bodies were dark, oily and acidic in nature.[3] Fiorina 161, due to its flat terrain, had severe howling winds, which worsened the temperatures felt on the planet and often carried stinging rain. The sky of Fiorina 161 was not clear, but rather cloudy and hazy gray.

The soil on the planet's crust was rocky and thin; this, combined with the planet's extreme seasons, allowed for minimal vegetation to grow. The few plants that did grow in between the black rocks were small, twisted, frail and brittle in nature. It was entirely plausible that no crops could be grown on Fiorina 161.

Fiorina was home to several indigenous species, although none of these lifeforms were particularly advanced. Several species of fish-like organisms lived in the planet's oceans,[3] while the land masses supported a genus of slow, primitive ground-dwelling animal.[4] By far the most widespread organisms on the planet were its swarms of insects, some of which were carnivorous and can even threaten humans under certain circumstances. There was a particular problem with tiny, parasitic, lice-like arthropods that fed voraciously on the keratin in hair, but curiously not fingernails, and, as a result, all human inhabitants were forced to continually shave their heads and bodies.[5] The planet was also home to several species of algae, moss and primitive salt grass.[2]

Due to the planet's intense climate, large oceanic coverage and arid, desert-covered landscape, Fiorina 161 was perfect for industrial facilities. Fiorina 161 was only known for its two establishments, an industrial lead-smelting works and a double-Y syndrome work correctional facility, both owned by the Weyland-Yutani Corporation. After these were closed down, they were kept operational by a small inmate skeleton crew who chose to stay behind. As a result of its prior industrialization, the planet is littered with abandoned and derelict industrial structures.

The Fiorina 161 Class C Work Correctional Unit (reg. 12037154) at one point maintained thousands of double-Y syndrome maximum risk prisoners, but in 2179 supported twenty-two inmates and three custodians. Because of the extreme weather conditions and drastically fluctuating surface temperatures, the inmates and custodians would stay in the foundry facility which was partly underground. The Correctional Unit on Fiorina 161 maintained an active lead works prior to the dissolution of its prisoner population. A morgue, mess and infirmary were amongst the few facilities available in the compound. The compound is almost ten square miles in diameter, with a total of approximately 600 active and inactive ventilation ducts.

In 2179, Ellen Ripley and the other survivors of Hadley's Hope (excluding Corporal Dwayne Hicks) were jettisoned from the USS Sulaco in a Type 337 EEV after a Facehugger caused an electrical fire in the hypersleep compartment. The EEV subsequently crash landed on Fiorina 161, killing both Newt and Turk (mistaken for Hicks). However, Ripley survived and was taken to the nearby prison facility, while Bishop, who was damaged further, was then placed in a scrap heap by the prisoners on the colony.

A Facehugger emerged from the ruins of the EEV and impregnated the prison's dog, Spike. Later, during the funeral of Newt and Turk, the Xenomorph embryo violently emerged from Spike and began to mature within the correctional facility's ventilation ducts. The Alien began a killing spree in the correctional facility, causing mass hysteria. Ripley rallied the inmates and proposed they pour highly flammable toxic waste, which was stored at the facility, into the ventilation system and ignite it to flush out the creature. An explosion was caused by the Runner's premature intervention, resulting in numerous casualties and several deaths.

The remaining survivors later formed another plan to lure it into the foundry's molding facility and drown it in molten lead. The bait-and-chase style plan resulted in the death of Dillon and all the remaining prisoners, except for Morse, who poured the liquefied lead into the mold, hoping to kill the four-legged monster. However, the Alien (now covered in molten metal) barely escaped from the mold, but was killed by Ripley when Morse told her to turn on the fire sprinklers and sprayed the beast with water, causing its mesoskeleton to cool rapidly and shatter via thermal shock.

A Weyland-Yutani "rescue team" arrived on Fiorina 161 aboard the USCSS Patna after the company was contacted by Francis Aaron regarding the presence of the Xenomorph, personally accompanied by Michael Bishop himself. The latter tried to convince Ripley to turn herself in so that they could extract the Queen embryo inside within her, but Ripley refused as she did not trust Bishop; she stepped back and climbed onto the mobile platform. One of the PMCs opened fire and shot Morse in the leg while Aaron, believing the group leader to be an android, assaulted him with a piece of metal before a Commando shot and killed him. Ripley helped Morse to move the platform over the furnace before she chose to sacrifice herself to destroy the Queen Chestburster in order to keep the company from getting their hands on it by throwing herself into one of the furnaces.

Following these events, the incident aboard Fiorina was subsequently covered-up by the Company - reports detailed that a stray EEV pod from the Sulaco had landed on Fiorina, releasing some kind of contagion, rumored to be a strain of Cholera.[6] Subsequent events entailed the deaths of all but Robert Morse, who was retrieved by the "Medical Frigate" Patna.[7] Morse's novel Space Beast, revealed the truth behind events on Fiorina, and though it was subsequently banned by the Company, black-market copies entered circulation across the Frontier, becoming something of a cult hit.

A research team from the Jĭngtì Lóng Corporation was notably dispatched to the planet after the closure of the prison complex there, hoping to find viable Xenomorph samples that had been missed by Wayland-Yutani.[citation needed]

Galgo Helder and Higgins once tracked a prisoner on the planet, before the trip to LV-223, in 2219.[citation needed]

The large miniature that portrayed the colossal furnaces on the surface of Fiorina was built by Boss Film Studios,[8] while the huge cranes (seen most clearly in the extended Special Edition of Alien3) were designed by Norman Reynolds.[9] The appearance of the cranes was based on the constructivist architecture typical of communist-era Russia.[9]

Exterior shots of Fiorina 161 were filmed on location at Dawdon Beach, County Durham, while interiors were filmed at Blyth Power Station, Northumberland and on the Albert R. Broccoli 007 Stage at Pinewood Studios in Buckinghamshire, all in the United Kingdom. The planet's surface was produced using matte backgrounds, miniatures, and full sets, this included the salvage of the EEV with oxen, background of the surface with a cross, a crane salvaging the EEV, Ripley's return to the EEV to use a stasis' scanner, and the opening sequence. During post-production, some early CGI was also added to the film to enhance the effects. Later, the USS Patna arrived with Michael Weyland and an assortment of Weyland Personnel with the spacecraft flying near the surface and the foundry facility as well as the penal colony. Michelle Moen matte department supervisor and Paul Lasaine matte painter painted all the matte backgrounds for the surface, sky and terrain features. This included the EEV's atmosphere entry from space and as it crashed into the water. The crew used an ultraviolet light to give the clouds a glow against a matte painting of the sky, this was an animated shot with the water splash a digital shot. 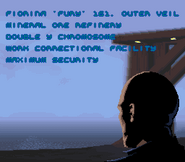 Fiorina "Fury" 161 as it appears in the opening of the Alien3 Super Nintendo game.