Used a Predator Falcon to search for prey.
Did not use a Plasmacaster
Killed Hanzo in a duel.

Brian Steele
Falconer was one of the Super Predators on the Game Preserve Planet. He notably used a falcon-like device to track prey from above. As well as an ongoing rivalry with the Jungle Hunter Clan, Falconer and his clan also abducted humans and other dangerous game to hunt on the planet.

The Falconer was killed in a duel with Hanzo, although Hanzo also perished from wounds sustained in the fight.

Falconer was a Young Blood Super Predator with a great talent for, and obsession with technological engineering. He did not believe in the traditional, orthodox methods of the Hunt, and personally believed in his own, unique style of stalking his prey. As a result, inspired from past hunts, he personally created a falcon-like device to track his targets from the air.[3]

On the Game Preserve

Falconer and his fellow clan members begin hunting on the Game Preserve Planet. The Berserker, Falconer, and Tracker Predators first test their prey's sanity and emotion. The trio try to make a trap for the humans by killing one of them and using him as bait to lure them, however they didn't fall for the trap.

Falconer, Tracker, and Berserker attack the humans, who had arrived at their Hunting Camp where trophies were kept as well as the Crucified Predator. However, the humans managed to escape the camp whilst under fire from the Super Predators. Meanwhile, Falconer sent his mechanical falcon to locate the fleeing humans, who had fallen into the river. Upon the falcon returning to Falconer at the camp, the three Super Predators de-cloaked. The Super Predators are later able to track the humans to inside Noland's hideout when Royce, firing explosive rounds from his Auto Assault-12, produced enough heat to attract them. They attack, but in the process Tracker is killed along with Nikolai, and the humans managed to escape again.

Falconer remained on hot pursuit of the humans. However, Hanzo decided to stop running to face the lone Predator by himself. Hanzo used a katana to fight against Falconer, who used his extended Wristblade. After several exchange of blows, Hanzo finally succeeded in fatally wounding his foe, killing him. As the Predator fell to the ground, dead, Hanzo also succumbed to his own wounds and his death soon followed.

Falconer possessed a fascination with technological engineering, leading him to create his own unique hunting tool that deviated from traditional Yautja methods of hunting prey - the Falcon.[4] However, his dismissiveness of old traditions was not completely lost, as he duelled Hanzo one-on-one without any weaponry beyond his wristblade, being the only Super Predator of the three to show a modicum of honour. However, it was also just as likely that he was merely toying with Hanzo and underestimated him, which proved to be a fatal mistake.

Falconer was incredibly agile and strong, being able to throw Hanzo a far distance and was also a skilled close-quarters fighter, using his Wristblade and Gauntlet to parry Hanzo's strikes. Falconer seemed to savor the fear and toyed with the human as he urged Hanzo to fight him. This Super Predator seemed to be the smallest in Berserker's hunting party.

The Falconer Predator was armed, like his clan brothers with a single, elongated wristblade, as well as a new cloak. The Falconer used a mechanical falcon to track his prey, for whatever the falcon saw the Predator could also see, and he had a full metallic glove on his left hand for the falcon to land on. In the film, however, the falcon landed on Falconer's shoulder. The Falconer Predator's Bio-helmet is much bulkier than others. During the hunt as the humans tried to escape, he was able to track their footprints on the ground with an unknown signature. He is also the only of the three Super Predators to not have a Plasmacaster, possibly due to his Young-Blood status.

The Falconer with a Hell-hound.

The Falconer in a crouching stance.

Falconer and Berserker as seen in Crucified.

Behind the scenes image of Falconer 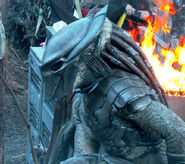 Nimród Antal speaking to Brian Steele in the Falconer suit.

Falconer as seen in AVP: Evolution.

NECA figure of the Falconer Predator. 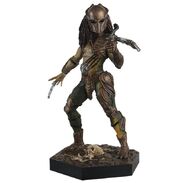 Eaglemoss Collections figurine of the Falconer. 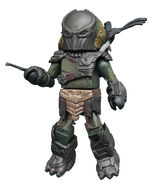 Minimates figure of the Falconer. 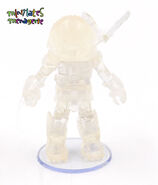 Minimates figure of the Cloaked Falconer. 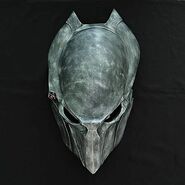 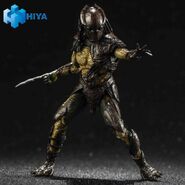 Hiya Toys figure of the Falconer.