The Falcon[1] was a bird-like spying device used by the Super Predator Clan on the Game Preserve Planet. The Falcon's role in the Hunt was to watch over the prey, and to study them, and their tactics. The Predator Falcon is capable of quickly moving across the hunting grounds and monitoring prey before returning to its master.

The Falcon is a remote-controlled drone developed by the Super Predator Clan that primarily functions as an intelligence-gathering device. It is able to give the operator a wide-ranging, real-time assessment of their surroundings, providing information on prey movements and positions over a wide area. As with a Yautja bio-helmet, the Falcon is also equipped with multiple vision modes.

There are two known variants of this device: one that greatly resembles a Terrestrial bird, which was used to spy on Drake and Ronald Noland during their encounter on the Game Preserve Planet, the is a more mechanical type used by Falconer during the time Royce and his group were on the Game Preserve. 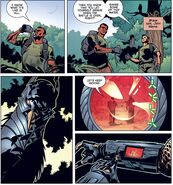 The Falcon seen in the comics has a more bird-like appearance.

This is what the Falconer Predator are able to see through a Falcon.

Hot Toys' Falcon included with the Falconer Predator 1/6 scale figure.
Add a photo to this gallery

Retrieved from "https://avp.fandom.com/wiki/Falcon?oldid=245496"
Community content is available under CC-BY-SA unless otherwise noted.