Fought and killed a Predator with one arm

Enoch Nakai was a former Corporal in the United States Army, under the direct command of Colonel Trench and Major Amblin, until he was honorably discharged after a close encounter with a Predator in New Mexico.

Nakai later makes a return appearance in the comic series Predator: Hunters in which he is recruited by Jaya Soames to join a special ops team dedicated to hunting down Predators.

Nakai had a complicated upbringing. Though his early years seemed to be relatively normal, his mother and father later tried for a second son and unfortunately, his mother died maternally, with his brother being stillborn. Traumatized by the death, his father blamed Enoch for his wife's demise and "left me for an orphan", as he describes. His abandonment had greatly affected Nakai, and he would later be taken in and raised by his very traditional grandfather, who did not take kindly to Nakai's rebellious nature and attempts at cultural integration.

Stationed at the Cole Army Base in Cibola County, New Mexico, Nakai was struggling to get approval for his three-day pass to spend time with his girlfriend Alda, which was constantly being delayed. He decides to put his frustration at bay by drinking sneaked Bourbon with his friend Dietl.

The next day, the two went out on an anti-aircraft patrol, with Dietl hungover but Nakai still functional. After Nakai picked up a peculiar scent, an unknown entity suddenly ambushes them and kills Dietl with an energy blast. Enoch rushes back to base, which had just recently discovered a crashed alien spacecraft, believing to have witnessed an "Adilgashii", (Witch). Nakai explained his experience to his superiors who advise him to keep what he saw to himself.

Back at base, Nakai was mourning Dietl's death in a barrack whilst two other soldiers began teasing him, resulting in a fight. The fight is broken up by the Sergeant who escorts Nakai to a storage room where Colonel Trench is waiting for him. Trench and the Sergeant inform Nakai that his claim has been validated; the ship army discovered was confirmed to be a combat vessel and that Enoch more than likely had a run in with its pilot. Enoch is granted his three-day leave, despite protesting.

Pass from the military

Far from the base the next day, Nakai is seen drunk in a saloon with his girlfriend. Alda decides to take him home after Enoch had clearly drank too much, to which he begins having odd dreams of his childhood.

Things did not get much better after he woke up from his nightmare, as his reluctance to tell anything to Alda resulted in an argument. This was suddenly broken up by a newsflash detailing that Cole Army Base had been destroyed by a nuclear explosion, much to Enoch's horror.

Enoch attempted to take Alda's car back to base so he could help out with the investigation, but he was denied access. Enoch calls Alda, telling her he's going to return back home, to which Alda informs him that a sheriff and his deputy were murdered, and that the herder's son told the news that they were killed by "blue fire". Nakai, realizing that this was the work of the same creature that killed Dietl. Nakai frantically urged Alda to leave town and told her he will sneak into "what's left" of Cole Base.

As night falls, Enoch travels through the prairies of New Mexico to Cole. He later finds a faint fire in the horizon with a figure sitting by it. He slowly approaches it, unseen, only to discover that the alien Predator is revealed to be the figure. Nakai manages to hide before it notices him. As the Predator becomes suspicious, it is suddenly attacked by a mountain Lion, giving Nakai enough time to flee to a nearby military camp, informing the camps Colonel Trench of the Predator's whereabouts.

In the town of Agate, New Mexico, the Predator claims it's latest trophy before it is intercepted by Enoch in a military jeep with a rocket launcher. A small firefight ensues as the hunter manages to escape, with Major Amblin being ordered by Colonel Trench to pursue it. Enoch is ordered to stay at Agate as part of the occupying force.

During his patrol, he meets with fellow American-Indian Dan Tilden, who was Zuni. After Nakai daydreams about his past life with his grandfather, Dan wonders why the Predator didn't use its "ray gun" after the ambush. Enoch suddenly realizes that the Predator may have a special camp where he is storing his equipment and rushes to inform colonel Trench. Trench is despondent to Nakai's claims to call off the search party looking for the hunter and instead says he'll order major Amblin to send out a scout for a camp.

Frustrated with his rejection, Nakai decides to steal a jeep and ride off and look for Amblin's squad. Nakai manages to find Amblin and his men just before the Predator ambushes and slaughters them all, including Amblin. Nakai manages to escape into the bushes without being seen, slipping from the Adilgashii's grasp once again.

The next day, Nakai is seen traversing a massive volcanic formation in El Malpais, ready to get back at the Predator armed with an M60. After a tiring and dangerous journey, Nakai reached a small jungle surrounded by igneous rock. He checks his binoculars and is able to discover his prey, resting at a small makeshift camp. Nakai rushes through the jungle towards the Predator's position but is suddenly intercepted by a booby-trap and has his right arm impaled and seriously wounded. Enoch's Adilgashii hears the noise and attacks. Enoch manages to briefly fend off the attacker with his M60 before it intercepts him and destroys the weapon. Enoch flees with the Adilgashii in hot pursuit in the trees before a branch snaps and the hunter falls to the ground, allowing Nakai to escape. He deduces that the hunter did not chase after him because he was recuperating from previous injuries and hadn't fully recovered.

Enoch returns to the igneous rock and back to a deep crater that he almost previously fell in. He figures that he may be able to lure the Predator into falling into the sixty foot hole, killing it once and for all. Nakai decides to set the forest on fire to draw it out to his position. His plan was a success and the Predator comes rushing out of the trees, unloading it's Plasmacaster into Nakai's direction. The hunter takes the bait and follows Nakai up to the formation where he suddenly falls into the trap hole. Nakai cautiously grabs his pistol and walks over to the hole to which the Predator lunges out from the hole and grabs Nakai, overpowering him. As Nakai's Adilgashii prepares to go in for the kill, gunshots from a distance distracts the Predator (the forest fire ignited the shells from Nakai's M60), giving Nakai enough time to grab his handgun.

Back at base, although Trench is thankful towards Enoch, he cannot ignore the amount of times he disobeyed orders and arranges an honorable discharge for him. He is later told by the government to keep everything he has experienced confidential.

From then on, Enoch managed to a find an occupation in a gas station. His relationship with Alda is also becoming strained due to his reluctance to talk to her. After a heated conversation at a diner, Enoch finally confesses his frustration towards being discharged and unable to tell anyone about his experience. He wonders how much the government could be keeping from him as a suspicious-looking man eavesdrops on the conversation.

One night, Enoch's grandfather, noticing his growing anxiety, decides to comfort him and shares a story of when Enoch's great-grandfather also witnessed a Predator attack 75 years earlier. Nakai suggests that it could have been the same Predator that attacked him at Cole, and that the government had to cover up the event just as they did now. The next day at the station, Nakai was later approached by the mysterious man calling himself John Smith (who could possibly be Peter J. Keyes). When Enoch found out that the feds were mostly interested in the monsters' gear, he declined their offer to join the hunt.

Returning to the hunt

Several years later, Enoch was recruited by a group of Predator hunters who had their own run-ins with Predators in the past and went on a lethal expedition to hunt Predators on an isolated island in the South Pacific.

Having a Native American ethnicity of Navajo descent, Nakai was constantly surrounded by racist and derogatory remarks made by his peers. This was something Nakai had to put up with from his childhood all the way to life in the military, and it frustrated him greatly. Despite this, he still remained a relatively composed and humble individual, though this dropped when provoked or drunk. He also harbored a rebellious side to him, happily disobeying orders if he felt it was necessary, as well as being a bit of a drinker.

Several years later, Enoch had become more solemn, being more prone to sarcastic quips and witty comebacks, though he was still just as easily angered by racist comments as before.

A young Nakai with his friends. 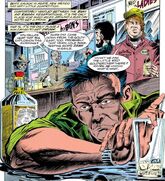 Nakai drunk at a bar.

Nakai reaches for his handgun.
Add a photo to this gallery
Retrieved from "https://avp.fandom.com/wiki/Enoch_Nakai?oldid=231245"
Community content is available under CC-BY-SA unless otherwise noted.