"Something is manufacturing breathable air down there."
―Chance (from Prometheus)

Emun Elliott
Emun Chance[1] was one of the two pilots who served aboard the USCSS Prometheus under the command of Captain Janek during its voyage to LV-223.

Prior to Prometheus mission

Prior to joining the USCSS Prometheus crew, Emun Chance was an FTL-licensed United States Air Force hero at the conflict of Z11 in 2078. Chance was honorably discharged in 2081. He then worked with Captain Janek, who would later become the captain of the Prometheus, for 9 years.[1]

After spending two years in hypersleep, Chance along with the other crew members were awaken. As the ship arrives at the surface of the planet, Chance and his co-pilot Ravel made a bet of one hundred credits about the mission either being a terraforming or an archeological expedition. When the truth of their mission is revealed during the crew's briefing, Ravel refuses to pay Chance as he corrected that Chance never made a bet about finding ancient aliens. Chance later joins the crew during their mission to find Millburn and Fifield, who were trapped in the Engineer Temple during the crew's first exploration due to the windstorm. The crew entered the temple, only to find several cylinders oozing with the black liquid. Chance leaned down to touch it, fortunately for him he was advised against it on time by Janek. They also found Millburn's body with a Hammerpede still inside of him.

Ravel and Chance decide to stay on board the Prometheus to help Janek stop the Last Engineer from traveling to Earth, as the Engineer plans on killing all humans by deploying its ship's cargo, the Black Liquid. They valiantly crash the Prometheus into the Engineer's ship, honorably dying in the process.

In Jon Spaihts' original script for Prometheus, titled Alien: Engineers, Chance's first name is given as Andrew, and he is part of the scientific team rather than a member of Janek's crew. In the script, Chance is deliberately impregnated with a Facehugger by David inside the Engineer structure, dying when the Chestburster emerges from him.[4] 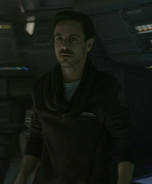