"It has been suggested that a Queen will continue to grow as her hive does, reaching Tyrannosaurus rex proportions in Empress and Queen Mother stages that rule over several Queens and several hives."
― Alien: The Roleplaying Game

Unknown, larger than a Queen

An Empress is another caste of Xenomorph monarch, albeit larger and stronger than a Queen. Queens are, in fact, subordinate to them and they themselves are only Subordinate to a Queen Mother.

Empress Xenomorphs are apparently rare. Their physiology has been seen to differ, with some appearing similar to typical Queens (albeit considerably larger), while others have been seen to have unique traits. These include a significantly tougher mesoskeleton compared to other Xenomorphs. Empresses have been seen to possess an ability to summon lesser castes of Xenomorph to their aid, similar to Praetorians, as well as driving all adult aliens around them into a combat frenzy, causing them to be more dangerous than usual.

An Empress can arise through the evolution of existing Queens. It is possible this evolution is linked to age; the Matriarch was a very old Xenomorph monarch and looks markedly different from common Queens. In particular, her crest was more elaborate than the crest typically found on a younger Queen. Furthermore, the Matriarch was immune to simple gunfire, and the Rookie was forced to find alternative ways to kill her when he encountered the Xenomorph in her Hive, indicating a reinforced mesoskeleton. Other known queens were not immune to gunfire in such a way where they could block bullets with the mesoskeleton on their arms.

It has been theorized that when a planet becomes sufficiently infested with Xenomorphs, several Queens are likely to occur[1]. Similar to ants, these Queens may all be a part of the same Hive, but instead of having equal "say" in Hive matters, it will defer to an Empress. The Empress is said to win her place in a great melee, not unlike larval Queens. The Queen who dominates in this melee, either by killing or besting her sisters, thus becomes the supreme ruler of that hive.[citation needed]

Some Xenomorph Queens have been known to evolve into tougher versions of themselves, known as War Empresses. Although they do not grow in size, their mesoskeleton toughens significantly, thought to be by as much as 70% from its original sturdiness, capable of deflecting all but the heaviest munitions.[2] Finally and most distinctly, a War Empress can induce all adult aliens around her to enter a combat frenzy, causing them to be more dangerous than usual. A War Empress' crest develops greenish-yellow marks mid-dorsally. Given that this evolution centers around combat, the War Empress may be a Xenomorph evolutionary response to serious military threats, similar to the Ravager. 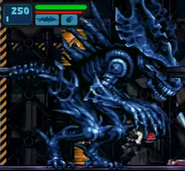 A possible Empress from Aliens: Infestation.

Retrieved from "https://avp.fandom.com/wiki/Empress?oldid=249662"
Community content is available under CC-BY-SA unless otherwise noted.