"They created us. Then they tried to kill us. They changed their minds. I deserve to know why."
―Shaw (from Prometheus)

Noomi Rapace
Lucy Hutchinson (young Shaw)
Doctor Elizabeth M. "Ellie" "El" Shaw[6] was an accomplished archaeologist with doctorates in paleontology, archaeology, human mythology, and metics who was assigned to assist the USCSS Prometheus expedition in discovering the homeworld of the Engineers on LV-223.

Together with her scientific partner and lover Charlie Holloway, Shaw discovered the location of LV-223 and convinced Weyland Corp to fund a scientific expedition to the planet. She believed that this would allow her to finally encounter the creators of mankind and "meet her maker," gaining answers to a number of existential questions about the nature and origins of human life. After contacting Weyland Corp obsessively, she gained the necessary funding for the project after the location of their eldest piece of evidence yet, located in the Isle of Skye.

A young woman of British ancestry, Shaw was raised from childhood in South Africa by her father, a missionary after her mother died of unknown disease. Years later, she also lost her father, who died of Ebola.

In 2089, during her expedition in the Isle of Skye, Shaw along with her love interest and fellow archeologist Charlie Holloway discovered a star map among several unconnected ancient cultures. They interpreted this as an invitation from humanity’s forerunners, or "Engineers". Shaw shared her discovery with Peter Weyland, the elderly CEO of Weyland Corp, who later funded the creation of the scientific vessel USCSS Prometheus to follow the map to the distant moon LV-223. Shaw came along because she believed that the Engineers created humanity and she desired to "meet her maker". After coming along with a team, she found the bodies of the Engineers and decided to take back the head of one. She found out from her examinations that they shared the same DNA, and thus proved her theory and beliefs. Shortly after, Shaw and Holloway make love and she was unaware that he was currently infected by an alien bacteria from Chemical A0-3959X.91 – 15. She later found out from David that she was undergoing an accelerated pregnancy, and immediately deduced that it was an alien lifeform since she was infertile. Before Shaw could attempt to remove the organism, she was sedated by David, who planned to put her in cryosleep and take her back to Earth.

When Shaw regained consciousness, crew members were preparing to put her in cryosleep. She pretended to be asleep before knocking them out and escaping, feeling severe pain from the movement of the embryo. She attempted to use Vickers' unique MedPod 720i to perform a cesarean, but found the pod was calibrated for male patients only and thus could not perform the procedure. Shaw was forced to improvise and managed to instruct the MedPod to remove the embryo by using a setting for foreign biomasses. As she began the procedure, the embryo began to move more violently. The MedPod managed to cut it out of her successfully. When the embryo emerged, it was a squid-like alien that was immediately violent and flailed around, attempting to attack Shaw, but was restrained by a mechanical arm. Shaw quickly had the MedPod close up her abdomen with medical staples and attempted to kill the embryo by activating the MedPod's decontamination procedure. While escaping through the corridors of Prometheus, she entered a room and found out that Peter Weyland was secretly aboard the ship the entire time and had been giving David orders.

Despite her ordeal, Shaw goes with David and Weyland to the dome and into the ship, where David revives one of the Engineers. The Engineer responds to David's attempts to speak to it by decapitating him and kills everyone except Shaw, who escapes and tells Janek to stop the ship by any means, which he does by ramming the ship with the Prometheus in a 'kamikaze' suicide-attack. Vickers lands nearby in a small escape pod, her own, larger escape pod (containing the MedPod) having jettisoned already. The Engineer ship crash-lands and begins falling over, crushing Vickers before settling. Shaw heads for the larger escape pod, which contains enough supplies to last for 2 years. After getting to the escape pod, Shaw discovers that her offspring has grown into a monster and when she is attacked by the Engineer she releases the squid-like alien, which restrains and impregnates the Engineer while Shaw escapes.

"Final report of the vessel Prometheus. This ship and her entire crew are gone. If you're receiving this transmission, make no attempt to come to its point of origin. There's only death here now and I'm leaving it behind. It is New Year's Day, the year of our lord, 2094. My name is Elizabeth Shaw, last survivor of the Prometheus, and I'm still searching."
―Shaw (from Prometheus)

A devastated Shaw escapes the pod, but she is soon contacted by David's head, who assures her that there are several other Engineer ships on LV-223, and that he can navigate them. David offers to return Shaw to Earth but she refuses and instead decides to head to the Engineer homeworld to find out why they chose to create humanity first and then inexplicably destroy it. After recovering David's remains from the crashed Engineer ship, the two activate another Engineer ship and leave LV-223 for the Engineer homeworld. As they leave, Shaw narrates and sends a transmission of the last log of the Prometheus to keep others away from LV-223: "There's only Death here now. And I'm leaving it behind."

Some time after leaving LV-223, Shaw recorded a transmission on Engineer technology that was later detected by the crew of the USCSS Covenant. Shaw and David's journey eventually led them to Planet 4, where they discovered a sizeable Engineer population. However, David annihilated the Engineers as a "gift" to Shaw. When she balked at his genocide, David began using her as a specimen in his genetic experimentation, attempting to make her "more than human"; despite his efforts at keeping her alive during this process, she eventually perished. David then made a grave for her in the citadel's garden. David would subsequently honor Shaw's death regularly through a ritual. Years later Daniels found her preserved, dissected, and severely mutated body in David's alien study room.

As a scientist, Shaw was very well prepared and had advanced knowledge in several research fields. She showed a high level of knowledge of ancient cultures and various methods to study them, as well as being skilled in sophisticated medical and forensic science procedures.

Despite being a very short, gentle, faithful and calm looking young woman, Shaw was a most humane and strong willed individual with a high level of moral reasoning and a very devoted Christian. Her inability to bear any children left a mark in her personality as she became very upset whenever she was reminded of that fact. Her infertility may be an explanation behind her fascination with creation and why the Engineers created humanity.

Shaw was also a very disciplined person who appeared to be in top physical condition for her gender and age. Several tragedies from her past also gave her a strong personality and resolve, as well as a high sense of self preservation, thus she could become very hard willed and brave, even resorting to physical violence if the situation required it.

The character of Shaw developed from Jocelyn Watts in Jon Spaihts' unmade Alien: Engineers script. Both share broad similarities, being the female protagonist who organize the expedition in search of the Engineers. Many key events involving Shaw in the film also occur to Watts, including, perhaps most notably, a sequence where Watts desperately uses a MedPod to remove a Chestburster from her body before it kills her.[7]

Elizabeth as she prepares for their first surface expedition on LV-223.

Shaw and the expedition crew as they arrive in front of the Engineer pyramid.

Elizabeth inside the Engineer pyramid.

Shaw as she prepares to meet her "maker".

Elizabeth on the surface of LV-223.

Shaw before entering cryosleep inside the second Juggernaut as David watches. 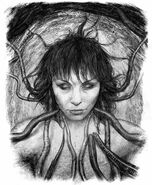 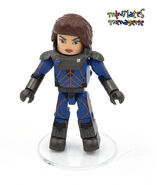 The dissected corpse of Elizabeth Shaw. 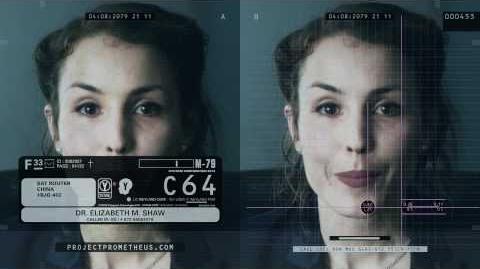