"While some have theorized the tubes are used for spinning and cocooning the resin for their hive, that has generally been discounted as a fallacy. The current line of thinking is that the tubes are a type of breathing apparatus, filtering out airborne toxins and allowing the creatures to breathe underwater. However, as aliens have been observed surviving the vacuum of space, it is possible they do not need to breathe at all."
―Alien: The Roleplaying Game

Dorsal spines,[1] also referred to as protuberances or simply spines,[2] are tube-like structures that occur dorsally on most adult variations of the Xenomorph.

Most adult forms of Xenomorph have been seen to exhibit a series of tube-like dorsal spines from their backs; one notable exception is the Runner, which lacks dorsal spines altogether. In cases where they are present, there are typically four such spines arranged in pairs, with a larger pair close to the creature's head and a smaller pair behind. Their exact purpose is unknown, although studies conducted by Weyland-Yutani have concluded that they are part of the Xenomorph's respiratory system, acting as atmospheric filters and delivering the requisite elements to the Xenomorph's body, similar to spiracles found on Earth-based insects.[1] Several terrestrial aquatic creatures likewise use spiracles to absorb oxygen without inhaling water, explaining the Xenomorph's proven ability to remain submerged for extended periods.[1]

Queens have a variation of the dorsal spines. Instead of actual, tube-like structures, spines run down its back, numbering at six instead of four. Praetorians have a similar set-up along their spines, being genetically similar to a Queen Alien[2].

Some Predaliens shown also lack dorsal spines, similar to the runner. Interestingly, the back spines of a Predalien resemble that of a Praetorian and are the only ones to do so. It is unknown if this is just an aesthetic similarity or if there is anything more behind it.

Runner aliens completely lack spines, instead having a smooth back. This is likely so that the creature, more tuned into its speed than its strength, is more aerodynamic, making it faster. However, this could be a side effect of a non-humanoid host.

Runners, when they evolve into Sentries, do eventually evolve Dorsal tubes, which they maintain even in their final evolutionary forms as Crushers.

Carrier Xenomorphs have specialized back spines, which have evolved to carry around the otherwise vulnerable Facehugger. Their spines shed nutritious material that Facehuggers consume while aboard them. 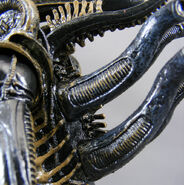 Retrieved from "https://avp.fandom.com/wiki/Dorsal_spines?oldid=257084"
Community content is available under CC-BY-SA unless otherwise noted.