Dogs, known taxonomically as Canis lupus familiaris, are carnivorous and sometimes omnivorous mammals. They have been domesticated by humans.

Dogs vary widely in appearance as they come in a variety of breeds that can mix with each other. Purebred dogs are usually bred with a specific function in mind, thus their biology will match that function. For example, Guard Dogs are usually larger, more intimidating, and are fearless in their demeanor. They are bred to protect their owners, property, or livestock from other animals or people who seek to harm, deface, or steal from them. Hunting Dogs boast stamina, strength, and most importantly, speed in order to run down game. Some dogs share a similar "function" to cats, in that they are primarily around for companion purposes. These breeds are called "toys" or "lapdogs".

The behavior of a dog varies across breed and, like their physiology, usually aligns with the breed. For example, hunting dogs tend to "point" at their prey while guard dogs tend to lock their jaws around a target until a command to let go or killed. Dog behavior can also be influenced by the environment, making their collective temperament both a product of nature and nurture. Thus, while a breed may have a general temperament, individual dogs will have similar but unique dispositions to one another.

Dogs are derived from the scant few members of the wolf that were friendly enough to be tamed by humans some millennia ago. They are the oldest domesticated animal and are uniquely attuned with human behavior. In the western world, they are referred to as "man's best friend" and assist humanity with a variety of jobs, from search-and-rescue to simple companionship. In other parts of the world, however, they are not seen as pets but as food and are raised like cattle to be slaughtered and harvested.

Dogs and Xenomorphs have no special relationship. However, the Dog is able to be utilized by the Facehugger as a suitable host. The resulting Xenomorph is a Runner, a quadrupedal, reddish-brown variant that lacks dorsal spines and relies more on speed than strength.

Dogs and Yautja have no special relationship. However, dogs can sense certain musks and pheromones that come off the species that humans cannot, therefore being able to pinpoint their location faster than a human could. 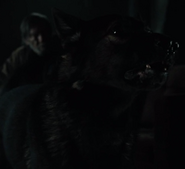 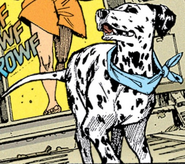 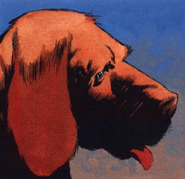