"Can we just talk about the bonus situation?"
―Parker (from Alien)

Yaphet Kotto
Dennis Monroe Parker[5] was the chief engineer aboard the commercial towing vehicle USCSS Nostromo. He was serving on the ship during its fateful voyage in 2122 when it encountered a Xenomorph on Acheron (LV-426), an incident that eventually led to the destruction of the ship and the loss of all but one of its human crew.

Parker was killed by the Alien whilst gathering oxygen tanks that would allow the survivors to flee Nostromo in its shuttle, Narcissus.

Dennis Parker earned his professional qualifications at the ICC Engineering Trade School's Martian campus, graduating with a Tech 2 degree.[5] Prior to his posting to USCSS Nostromo, Parker served as engineer aboard the cargo vessel USCSS Nonnabo, where in 2117 he was joined by engineering technician Samuel Brett.[1] The two quickly struck up a strong friendship, both eventually transferring to Nostromo together in 2120.

"I hate to bring this up but, uh, this a commercial ship, not a rescue ship..."
―Parker, regarding the investigation of the signal (from Alien)

After the crew was abruptly revived from stasis upon Nostromo's receipt of an apparent distress signal from Acheron (LV-426), Parker was strongly opposed to landing there, citing the crew's lack of training in rescue operations. While landing on the moon's surface, dust entered one of the ship's engine intakes and caused damage, triggering an electrical fire in the engineering section.[6] While Parker and Brett managed to extinguish the blaze, their repairs were not entirely completed by the time Executive Officer Thomas Kane was returned to the ship with a Facehugger attached to him and Captain Arthur Dallas order the ship to take off. Concerning Kane's condition, Parker was adamant he should be put into stasis for the return journey to Earth, but Science Officer Ash ignored his suggestions. Parker and the rest of the crew were present when the Chestburster emerged from Kane, killing him.

Parker later witnessed the Alien dragging Brett's corpse away after killing him, becoming the first person to see the fully-grown creature and live. After Dallas was also slain, Parker dismissed any suggestion of fleeing the ship and devoted all of his skills and determination to killing the creature. He saved Warrant Officer Ellen Ripley from Ash, whom he decapitated, revealing him to be a synthetic. When Ash told the remaining survivors of Special Order 937 and taunted them regarding the futility of their fight against the Alien, Parker incinerated his body in anger and agreed to set Nostromo for self-destruct and flee aboard the shuttle Narcissus.

While gathering sufficient coolant for the shuttle's life-support systems, Parker and Navigation Officer Joan Lambert were ambushed by the Alien. Parker found himself unable to fire on the creature with his flamethrower for fear of hitting Lambert as well, and so charged the Xenomorph with a hook, but the Alien quickly knocked him to the floor with its tail. The creature pinned him to the wall before killing him with a headbite.

Assertive and acerbic, Parker was a dauntless complainer and, abetted by his close friend Brett, spent much of his time aboard Nostromo demanding increased pay. He was opposed to investigating the signal from LV-426, as he considered the assignment far outside his remit as an engineer aboard a commercial towing vehicle. Despite this, when the Alien began slaughtering the ship's crew, Parker became the strongest advocate for fighting and killing the creature, his actions no doubt fueled by the loss of Brett. It is possible that this was aggravated further by a sense of personal responsibility for Brett's demise, as he was the one to send Brett off to retrieve Jones, the ship's cat, inadvertently sending him to his death.

Being part of the "working class" engineering team aboard Nostromo, Parker often remained distant from the rest of the crew, particularly Ripley and Ash, whom he seemed to dislike on a personal level. However, as Ripley assumed command and employed her mental strength and resourcefulness to try and guide the survivors through the crisis, his respect for Ripley grew greatly. He also personally saved Ripley after Ash attacked her. Even before this, Parker sided with Ripley in her decision to leave Kane outside, correctly pointing out that the creature attached to him could well pose a threat to the crew. Parker was also very logically-minded, questioning how Kane was able to breathe with the parasite attached to his face and repeatedly enquiring why he wasn't just put into stasis.

Parker's dossier noted that he disliked figures of authority.[5]

Being an engineer, Parker was skilled with an array of tools on board Nostromo. After the Alien was found to have grown to full size in just a matter of hours, Parker constructed several makeshift incinerator units to help combat the creature and carried one himself until his death.

Parker alongside Kane in his final moments. 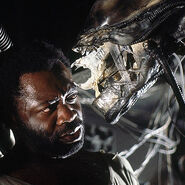 Behind the scenes image of Parker face to face with the Xenomorph.

Parker, alongside Brett, as he appears in Alien: The Illustrated Story.

Attacking Ash in the comics. 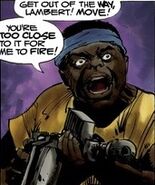 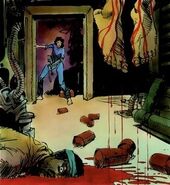 Parker and Lambert's corpses in the comic. 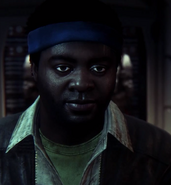 Parker alongside Brett in Crew Expendable. 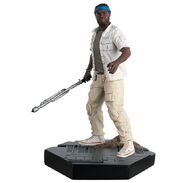 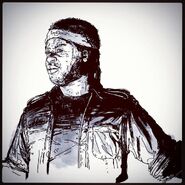