A Defender is a dark greyish blue Xenomorph variety that appears in the Alien vs. Predator (1994 arcade game).

Defenders are a strong type of Xenomorph that can actually deflect the strongest of ammunitions with its carapace, wrists and probably legs. Those body parts possess very strong and thick chitinous armour which makes it an obvious danger.

This type doesn't use its forelegs, which are actually formed as arms, in its crawling movement; rather it moves like a humanoid which means it is a bipedal type. It is best to defeat it with strong weapons or skilled martial arts (as depicted in the game). All in all, its service is for gathering hosts and defending the hive just as any other Drone, only with a nasty capability to defend itself making it a rather more dangerous type than others.

Its high resilience combined with its Drone-like modality may mean it was developed specifically for the purpose of capturing hosts whilst under heavy enemy attack, on the occasion that a Xenomorph hive has a greater need to spawn reinforcements. 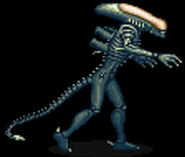 A Defender. Note its humanoid pose.