Xenopedia
Register
Don't have an account?
Sign In
Advertisement
in: Articles with conjecture, Creatures, Articles Needing Cleanup,
and 3 more
English

View source
watch 00:53
Prometheus - What is the Deacon?
Do you like this video?
Play Sound

Unknown
Smaller than the Last Engineer (at birth)

The Deacon[3] is a Xenomorph-like creature formed following the Trilobite's impregnation of the Last Engineer.

The Deacon was the result of the Engineers' Chemical A0-3959X.91 – 15 that was used as a bioweapon. The Liquid infected Charlie Holloway, who impregnated Elizabeth Shaw with a Trilobite. This Trilobite eventually matured and impregnated an Engineer on LV-223, whereupon the Deacon developed and burst from the Engineer's chest.

126 years later in the year 2219, the vessel Geryon and its crew land on LV-223 under the pretense of a salvage mission, to catastrophic results, leaving only captain Angela Foster, Galgo Helder, Chris Hanlock, Jill, the Predator Ahab and the mutated construct Elden as the sole survivors. After a series of events, the survivors arrive at a mountain where they believed a human beacon was located. Hoping to escape the moon, the surviving members using the Onager, begin tunneling into the mountain where they came to the realization that the mountain was "alive" and that they were inside an acidic "vein", Elden assumed that whatever was on board "Weyland's ship" had heavily mutated around it. This implies that the Deacon had, in fact, traveled to the ruins of the Prometheus and had mutated around the vessel until it became an organic mountain.

The Deacon has a blue smooth body, four fingers, a thumb, and plantigrade legs. Their mouth possesses two different sets of teeth —

the upper jaw contains teeth typical to herbivores, while the creature's lower and inner jaw have a comparatively small number of sharp teeth. This lower jaw extends outwards on what almost appear to be a second set of gums. Unlike the similar Xenomorphs, the Deacon lacks a tail, and it's head ends in a sharp point.

The size of the Deacon is unknown, although it can be assumed to be exceptionally large, given the size of it's host. As a newborn, though smaller than the Engineer, it appears large enough to be at least comparable in size to a full-grown human.

The initial stage in the Deacon's life cycle spawns from the Black liquid known as Chemical A0-3959X.91 – 15 — a biological weapon created by the Engineers. The substance has a unique reaction with every animal genome it encounters and was designed to induce genetic chaos. Delivered via ingestion or inhalation, it is capable of mass destruction. Once a host is infected with the deadly pathogen, they experience a painfully rapid genetic transformation.

After Holloway ingested the pathogen, he transmitted his infection to Shaw via insemination during intercourse. Just as soon as Holloway started showing degenerative effects related to his infection, Shaw became "pregnant" with a rapidly-evolving Trilobite incubating inside of her body.

Upon successful removal of the alien creature during an impromptu cesarean section in the Pauling MedPod 720i, the Trilobite was quarantined in a lab and rapidly matured into a massive creature. It later came in contact with an Engineer and subdued him in a way that resembled how a Facehugger subdues its prey. The Engineer would subsequently incubate an embryo that would gestate inside him, until an almost fully-formed infant Deacon bust its way through the Engineer's chest.

The biggest difference between Xenomorphs and the Deacon is the host they come from. As with all Xenomorphs, they gain different characteristics from their hosts. It is important to note how the birth of this creature is different from the majority of Xenomorph births. Similar to the Bloodburster from Alien: Covenant, the Deacon was born with arms and legs, while most other Xenomorphs born of humanoid hosts lack legs and arms before maturing. Instead of having a second inner jaw like the Xenomorph, the Deacon has a single set of protrusible jaws more akin to those of the goblin shark, where the upper jaw can unhinge and move forwards.[4] The deacon also lacks any biomechanical features, being nearly completely smooth, with the exception of some ribs showing.

Unlike most Xenomorph Chestbursters encountered by humans (which push forwards out of their host's body), the Deacon used the sharp back end of its head to tear a way out of its host. Another difference is that because of its size, the host is already dead before it is "born" as the host's organs would almost certainly be destroyed by the presence of the Deacon.

In Jon Spaihts' original script for Prometheus, titled Alien: Engineers, the film's final creature was originally intended to be a Jockey-Xenomorph, dubbed the "Ultramorph",[5] and was to engage the heroine in a lengthy running battle across the surface of LV-426. However, the creature was ultimately changed to the Deacon and its role was dramatically reduced to a virtual cameo.

Concept art of the Ultra-Morph produced for the film more closely resembles the traditional Xenomorph than the creature used in the finished movie.

There is some confusion over whether or not the Deacon is intended to be some kind of Xenomorph, largely brought about by the script revisions mentioned above and as a result of the production team occasionally referring to the creature as a Protomorph or Proto-Xenomorph (terms carried over from earlier script drafts).

Some evidence suggests the Deacon may not supposed to be a Xenomorph breed or even a progenitor to the Xenomorph race. A mural of a fully-grown Xenomorph, resembling a Drone, can be seen on the wall of the Engineer Temple on LV-223, indicating that the Xenomorphs already exist by the time of Prometheus. However, the creature in the mural also seemingly possesses qualities of the Deacon, such as in its arms, which lack the biomechanical motifs of the traditional Xenomorph and instead are smoother and more biological in nature. The film's co-writer, Damon Lindelof, has stated, "I felt that the punchline of Prometheus was going to be that there is human DNA in what we have come to know as the human Xenomorph." While one could argue that his use of the word "was" is an indication that this concept was dropped from the film, the Deacon's inclusion as a cameo in the film's final scene does seem to indicate the creature's importance. In addition, the events leading to the Deacon's creation are a clear indication that it's in fact derived from the genetic material of Holloway and/or Shaw, exposed to the black goo, a known mutagen, meaning that there is, in fact, human DNA in its genome, a possible nod to the fact that Xenomorphs take on the characteristics of their host. The way in which it's portrayed, bursting from the chest of an Engineer, is an almost definite nod to its relationship with the Xenomorph.

The Deacon is not a creature created by a regular Facehugger impregnating an Engineer, but rather is created by a Trilobite. In the film's original script, an Engineer did become impregnated by a Facehugger, leading to an Engineer-spawned Xenomorph, although this was later changed when 20th Century Studios pressed Ridley Scott to remove the Xenomorph from the story altogether.

In the commentary of the film Prometheus, however, the production crew and even Ridley Scott himself acknowledge the creature by calling it a form of "Xenomorph". In fact, in one of the commentaries, a member of the production crew refers to the Deacon as a young Xenomorph Queen, and that it was not something intended to be created by the Engineers, but was "something new, special, totally unpredicted."

The creature's production name became known as "The Deacon" because according to Prometheus director Ridley Scott its head looks like a Bishop's mitre, the Catholic church Deacon's pointed hat. [6] The name could also be a metaphor, derived from the fact that while the Deacon is a means to an end for the engineers, they are not quite on the level of the traditional Xenomorph. In modern Catholicism, a deacon is an ordained minister of an order ranking below that of the priest.

The Deacon prop in the Behind the Scenes of the Prometheus movie.

The Deacon before showing its secondary jaw. 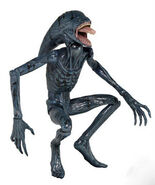 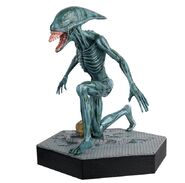 Eaglemoss Collections figurine of the Deacon.

Concept art of the "Newborn" Deacon.

Concept art from Prometheus,[8] showing a comparison between the original Xenomorph from Alien and the Deacon.

Concept art of the Deacon from Prometheus: The Art of the Film.

Concept art of the Deacon leaving the life-boat. 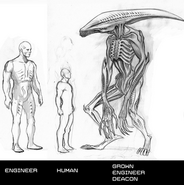 Unused concept of the adult Deacon from Prometheus: The Complete Fire and Stone.

Concept art of the Ultramorph. 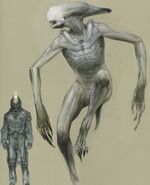 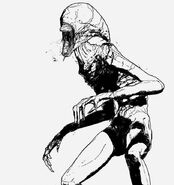 Original sketch of the Deacon by Tristan Jones.