David 8 (D8)[1] is a synthetic model that was manufactured by Weyland Corp in the late 21st century and "powered" by Verizon FiOS. One of these models was aboard the USCSS Prometheus when the ship explored LV-223.

David 8 could be programmed to enter a default neutral state, devoid of emotional engagement. In this state, David 8 reacted to his surroundings using only his logic actuators and did not access his facial mapping sensors or other advanced emotion-response pathways. His Motivation Sequences were bypassed in favor of a simplified rational response. This state could be useful for applications where traditional non-feeling cybernetic behavior was required.

When David 8's sensors detected rage or anger in the voices and expressions of his human counterparts, he could instantly simulate anger (akin to irritation), primarily for the purpose of expressing sympathy with that human's emotional state. However, David himself would resist anger toward humans unless the display of that emotion was absolutely vital in reaching a pre-programmed goal.

Designed to exhibit poise and natural-looking composure, David 8 expressed effortless confidence in his physicality. Additionally, his data processors constantly returned flawless logic in every situation. Since logic was a strong basis for human confidence and conviction, David 8 easily assumed these emotions. The ability to convey a healthy confidence was a vital tool in David 8's considerable arsenal of emotional skills.

Difficult to control in humans, disgust was one of the most challenging emotions for David 8 to learn. Naturally mannerly and gracious, David 8's programmers were forced to design micro-deviations in his synthetic "neural" pathways to disrupt this standard state. David 8 could then recognize and respond with a perfect facsimile of contempt to any situation that he found particularly loathsome, boring or disdainful.

David 8 shared in human-like joy in his own unique way. In humans, the mere physical expression of joy (raising eyebrows, turning mouth corners up, etc.) could actually generate the emotion of joy itself. David 8 experienced joy in much the same way. His micro-articulating facial muscles formed a perfectly jubilant expression in reaction to an enjoyable situation.

David 8 had been programmed to experience grief and sadness through a complex series of neural functions that could simulate a perceived memory. This allowed David 8 to relate to humans in a way that no previous model could. Many things made David 8 sad, and with his highly attuned sensors and fluid release unit, David 8 would actually cry in very emotional or sorrowful situations.

The ability to wonder and look at the world in new ways was truly a pure and essential element of being human. David 8's inquisitivity algorithms, like the retooled Motivator Sequence, created eagerness and generated questions such as "How can I relate to this human?" or "How can I improve this workplace situation?" Curiosity allowed David 8 to conduct focused and intense investigation into solving problems that could alleviate human stress.

David 8 trusted his human programmers implicitly. In order for David 8 to be successful in a home or office, however, he had to be trustworthy as well. Trust was a complex human emotion that David 8 garnered through ultraprecise verbal cues, pupil dilation and controlled facial movement, inviting acceptance and confidence. David 8 was generally programmed to cultivate a sense of calmness and security around him.

David 8 was a "perfect" confluence of technologies. His advanced cybernetic vision had been further improved to include focus-adjust in low light conditions. And a global location mapping algorithm identified David 8's coordinates and returned him to a pre-programmed rendezvous point. David 8's Pursuance Protocol ensured quality performance: given a project to complete, David 8 would see it done.

With a fluid intelligence on the order of 1012 neurons or 200 petaflops, David 8 exhibited twice the neural net capacity of humans. The sensory-data processor in David 8 combined perfect human reasoning with the most advanced cybernetic computing power. Owing to such technology, David 8 could function autonomously in any human environment, displaying complex human intellectual traits such as curiosity and self-motivation towards a final objective.

An advanced polyurethane coating replicated the biological properties of human skin to exact texture, pliability and tensile strength. With a cadmium alloy endoskeleton, David 8's frame could withstand over 1,000 pounds of compression force. Micro-distributed accelerometers provided ultra-keen kinesthetic awareness. And as a (new on May 14, 2075) design feature, David 8 had been programmed in several common sports modes; he enjoyed basketball, cycling, golf and more.

His cadmium endoskeleton was guaranteed for the life of the product.

David 8 was fluent in all known languages through a dialectic implant and could infer the linguistic components of entirely new languages if encountered. Communication between humans and David 8 should have felt entirely fluid and natural.

He instantly recognized the tone and timbre of a new voice and would register it with his database.

David 8 was easy to operate and entered seamlessly into human environments. All that was required was to speak a command in the user's normal tone of voice. Customizable vocational or goal-objective programming was available on some models.

David 8 could record, process, understand and express many complex emotions, but he would never know true human feelings such as love, grief and compassion.

Unlike previous models, David 8 could conduct all of his own maintenance procedures. He constantly monitored the degradation of his high-turbidity hydraulic fluid and would replenish at regular intervals (bi-monthly approximate for most mixed-use applications). His zero-loss lithium ion cells were guaranteed for the life of the product.

Major repairs or physical damage must have been addressed through an authorized Weyland Cybernetics facility.

From the marketing offices of Weyland Cybernetics Logic Design and Research Facility, locally referred to as the "algorithm farm" on HD 202206bm, analysts report that the latest numbers for the new David 8 unit pre-order registration are exceeding even the highest expectations.

After testing favorably in over 80% of households and workplaces, Weyland Cybernetics seems poised to make good on its "One in Every Home" promise with the upcoming David 8 Introduction Initiative this spring. In addition to 2-year trial placement in thousands of homes and businesses on Earth, David 8 has additionally wowed test audiences across the galaxy, performing off-world assistance missions on several newly terraformed planets.

"He's even participated in titanium mining outside the industrial powerhouse, Outpost September, on KOI-252.01," explains William Concordov, Weyland Industries senior spokesperson. "As I understand it from the reports, Weyland miners and employees at the outpost called him 'just one of the guys.'" says Concordov.

Consumer interest is growing thanks to word of mouth and a dwindling supply of new David 7 models on the market. Preliminary specifications have not yet been fully released, but Weyland Industries recently revealed that David 8 will have improved emotion recognition software, a highly strengthened musculo-skeletal structure, and easy self-maintenance features.

"Weyland Industries has spent years trailblazing the most advanced cybernetic technology anywhere in the world," says Concodov, "David 8 will show it all off."

Example of the David 8's memory storage and retrieval.

The David 8's detail and range of expressive emotions.

The Weyland-stamped fingerprint of authenticity.
Add a photo to this gallery 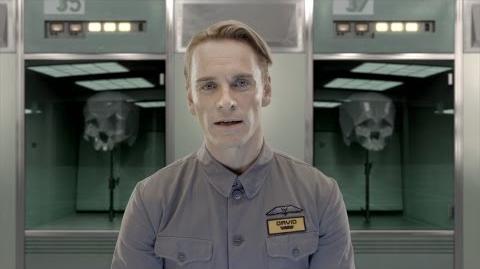 Retrieved from "https://avp.fandom.com/wiki/David_8_(model)?oldid=242929"
Community content is available under CC-BY-SA unless otherwise noted.