Michael Fassbender
Matt Hatton
David was an android commissioned and built by Sir Peter Weyland. He would serve as the basic template for the David 8 and Walter model lines, but was apparently himself unique, possessing creative and emotional capabilities in excess of commercial models.[3] In 2091, he was assigned to the crew of the USCSS Prometheus for its mission to LV-223, and was one of the two survivors of the disastrous expedition, along with Dr. Elizabeth Shaw.

David would go on to discover Planet 4, where he would live alone for a decade after committing genocide against the species that inhabited the planet, carrying out genetic experiments involving the black liquid mutagen and seeking to create the "perfect organism". He was later discovered by the crew of the colony ship USCSS Covenant, and ultimately hijacked the vessel for his own ends.

Peter Weyland was responsible for commissioning and creating David; some time after, he asked for the android to describe his surroundings and then for his name. After looking at Michelangelo's masterpiece statue, the synthetic responded with the name 'David'. Weyland told David that one day the two would search for man's creator. David questioned Weyland as to why he must serve him if he himself would live forever and Weyland would not. Weyland, annoyed at this remark, ordered David to serve him tea from a kettle sitting nearby. David begrudgingly complied.

Although David was later approved to join the Prometheus expedition, several personnel at Weyland Industries harbored doubts about the unit due to the fast-tracked nature of his development which was, at the time, seen as a necessary measure in order for David to be able to join the crew and increase its chances of success.[4]

David 8 wandered the halls of the ship Prometheus, riding a bicycle, dribbling a basketball, learning ancient languages, and watching films, with a particular favorite being Lawrence of Arabia. During crewmember Elizabeth Shaw's hypersleep, David viewed one of her dreams (via a visual visor) about her childhood relationship with her father and their beliefs on faith, which David found inspiring; like Shaw, David had a curious interest in the Engineers and their advanced technology. He served Vickers without question while also taking orders from Peter Weyland, who presumably asked David to collect samples of what they found on LV-223 - the Prometheus expedition's destination.

Able to comprehend the languages surrounding the Engineer structures on LV-223, David activated one of the doorways, and he was fascinated by the large altar of urns inside. Particularly intrigued by the black substance found on the alien structure, David secretly acquired an ampule of it; subsequently, Shaw warned of an approaching windstorm. During their return to the Prometheus, David saved Shaw and her boyfriend Holloway from the storm when she endangered herself trying to retrieve a dropped Engineer head. When discovering that the head was really covered by a skeletal helmet, David was the only one strong enough to be able to unlock it, and was awed by its cellular preservation. He was soon disappointed by its explosive bacterial infection, realizing it was "mortal after all." Driven by curiosity and Weyland's command to him to "try harder," he spiked Holloway's drink with the bacteria from the urns. When ordered to go back to the structure to find their colleagues, David chose to repair one of geologist Fifield's pup sensors which, he knew, was really hindered by a door. Upon discovery, he was amazed when it revealed the main deck of a starship, and its activated virtual map of the galaxy excited him even more upon finding that it was intended to travel to Earth, only to be suddenly switched off. To provide the finishing touch, David finally discovered an Engineer alive in one of the ship's hypersleep chambers.

After the remaining crew returned, believing some kind of alien airborne infection caused the deaths of their members and Holloway's illness, Shaw -- who was coping with Holloway's recent death -- was being prepped by David for an examination. Even when David tried to relate to her situation by bringing up the similarities between the death of her lover and that of her father, which he learned from watching her dreams; this only proved to profoundly disturb Shaw rather than comfort her. When he learned that she was pregnant with an alien creature, he recommended that she be frozen until the alien could be properly removed, to which Shaw emphatically objected; he subdued her with a sedative. Shaw would later escape and remove the creature herself via surgery in the Pauling MedPod. After the surgery and while wandering the halls in a sedated state, she found David nursing Peter Weyland, who had secretly been on board the ship all along. Even when Shaw tried to convince them to abandon the mission and return to Earth, David mentioned the discovered Engineer, at which time Weyland suggested that the crew would revive it.

When going to see the Engineer, David was asked by Shaw about the Engineers carrying bioweapons, at which point David explained his patricidal outlook, reasoning that destruction was a form of creation and that all creations yearned to see their creators dead. After waking the creature and attempting to speak to it in a language it would understand, David was at first in awe, believing that the Engineer was humbled to meet him. He was proven sorely wrong when it decapitated him and killed the others, with the exception of Shaw, who managed to escape during the massacre. Despite being decapitated, David was still able to function, saying goodbye to his dying "father," and warned Shaw that the Engineer was pursuing her.

After Shaw survived her battle with the Engineer, David assured her that it was possible for her to escape the planet, but only if she brought him with her, as only he could navigate the alien craft. Although Shaw agreed to accept his help, she insisted that instead of Earth, they must go to find the homeworld of the Engineers. After retrieving David's body, Shaw stuffed David's head in a duffel bag, and the two departed in one of the Engineers' ships to find the Engineer homeworld.

Eventually, Shaw was able to successfully reattach David's head to his body. The two were successfully able to locate the Engineer's homeworld before Shaw entered one of the ship's hypersleep chambers. David told her he would wake her upon their arrival, using the duration of the voyage to further study the Engineers. Upon arriving at their homeworld, David — having come to the conclusion that the Engineers and humans were equally inferior to androids — used the ship's armory of Steatite Ampules to wipe out the Engineer civilization on Planet 4, unloading them on the unsuspecting masses.

Following the Chemical A0-3959X.91 – 15 inside the ampules exterminating or mutating the non-botanical organic life, David claimed the Engineer Temple as a laboratory and began meticulously documenting the native fauna, flora, and fungi, using the planet and what was left of its inhabitants to continue his experiments with Chemical A0-3959X.91 – 15 while amassing a collection of detailed biological illustrations and records of his experiments. At some point he killed Shaw, conducting experiments on her dissected corpse while building a grave and mourning her death. Through experimentation on hybridizing the creatures formed from the mutagen, David created several large eggs but was stalled in his research, needing a living host to serve as an incubator for his creation.

When the USCSS Covenant arrived on the planet, David intervened to drive off a juvenile Neomorph and led the survivors to his base, forming a bond with Walter, a later-generation android. When the Neomorph infiltrated the temple, David approached it and attempted to communicate with it, but it was killed by Chris Oram. Enraged, David took Oram to his laboratory and explained his research, then tricked him into activating an Ovomorph. Following the birth of a prototypical variant of Xenomorph, dubbed the Praetomorph, David attacked Daniels, expressing the intent of doing to her what he had done to Shaw, but was confronted by Walter.

After a brutal fight, David killed or disabled Walter and amputated one of his hands to disguise himself as his "brother," as well as donning Walter's clothing and replacing his voice box with Walter's. Upon reaching the USCSS Covenant, David helped the surviving crew, assisting them in killing a second Praetomorph, and placed them into hypersleep. However, he subsequently hijacked the ship and set off for the planet Origae-6 to continue his experiments after placing two Facehugger embryos into a freezer.

David was almost childlike in his curiosity with understanding humans. His interest in Lawrence Of Arabia inspired him to model himself after the lead protagonist, T.E. Lawrence, from quoting his lines, to styling his hair. He sensed that the crew still viewed him as just an android, even being taunted by Holloway's biased remarks towards him as being such. Despite this, David was able to tolerate his treatment with the crew, and would still be willing to assist them. He also tried to comprehend his emotions in an appropriate manner of social interaction, especially when he found a curious interest in Elizabeth Shaw. Like Shaw, David hoped to discover the Engineers and their advanced technology, although his aim was to understand if man's existence was similar to, or different from, his own.

On the negative side, despite being able to understand human emotions, he was unable to project them himself. David himself freely admitted that he was capable of carrying out unethical deeds without obligation; he also admitted to disliking unnecessary violence. David's curiosity and lack of compunction led to Holloway's death in which he spiked his drink with Chemical A0-3959X.91 – 15 to observe the resulting effects.

David appeared to be torn by his ingrained allegiance to Peter Weyland. His behavior became cold and detached while executing Weyland's directives, and more compassionate when left to his own devices. He expressed to Shaw his desire for Weyland to die, possibly to free himself or because he disagreed with Weyland's desire for an extended life.

Following his decade-long isolation on the desolate Engineer planet. David had become dangerously ambitious, his curiosity in the creation of life evolving from a fascination to an all-out obsession. Prior to what he was like several years ago, David seemed to have gained his own sense of individuality and the ability to possess genuine human emotion, as he openly expressed his love for Shaw in the presence of the less emotive Walter. However, ironically despite gaining a greater sense of humanity, or at least what he believed to be, David became dispassionate with the human species considering them inferior and coming to establish something of a god-complex. As such, he planned to sacrifice the crew of the Covenant in the same manner as Shaw for the purpose of his research. Though just as calculating as before, David developed a more eccentric persona. Along with his disdain for humanity, David held the Engineers in the same low regard, which resulted in him committing genocide against the race on Planet 4. 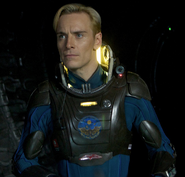 David in his space suit.

David watches a hologram of an Engineer.

David within the Juggernautin the cargo bay

The Last Engineer decapitating android David's head before smacking Weyland with it.

Concept art of David and his experiments.

Concept art of David unleashing a swarm of locust-like creatures upon the Engineers, byKhang Le. 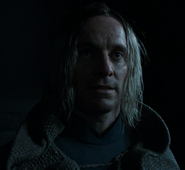 David 8, shortly after rescuing the crew of the USCSS Covenant. 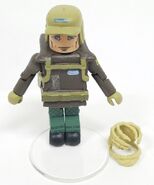 Pop! Vinyl figure of David.
Add a photo to this gallery 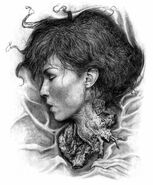 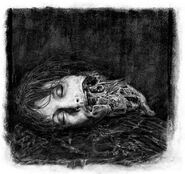 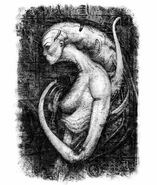 Retrieved from "https://avp.fandom.com/wiki/David_(USCSS_Prometheus)?oldid=266459"
Community content is available under CC-BY-SA unless otherwise noted.