Sergeant Dan Lopé[3][4] was the chief security officer aboard the colonization spacecraft USCSS Covenant. He was the husband of Sergeant Tom Hallett. He was serving on the Covenant during its disastrous voyage to Origae-6, during which it suffered several catastrophes that resulted in the loss of most of the ship's crew and its hijacking by David.

Lopé was part of the expedition team that set down on Planet 4 and died after a Praetomorph burst from his chest after being briefly subdued by a Facehugger.

After Captain Oram declared that the crew will investigate Planet 4 rather than continue traveling to Origae-6, Oram, Lopé and his team travel with Oram and several others to conduct the investigation.

Karine and Ledward go one way in order to run some tests on the environment, while Oram, Daniels, Lopé, and Lopé's security team trace the source of the transmission Tennessee found (which showed a human, later revealed to be Elizabeth Shaw, singing. During their respective investigations, Ledward and Hallett get infected with Chemical A0-3959X.91 – 15 via spores on the ground. Karine radios Oram letting him know that Ledward is getting sick, and Oram beings leading the crew back to the ship.

As the group returns to the ship, Hallett begins suffering from the chemical, thus slowing the group down. They are unable to return before the ship is destroyed in a misguided effort to kill a Neomorph born from Ledward. Just then, Hallett begins convulsing and screaming in pain, and as the team try to restrain him another Neomorph bursts from his throat and mouth before fleeing. Shocked at Hallett's horrific demise, Lopé remained at his body and mourned his loss while the rest of the security personnel secured the area.

Later that night, the two Neomorphs attacked the group. Ankor is killed, and Walter loses a hand before one Neomorph is killed, and the other is scared away by David's flare gun. David then leads the team to his temple.

After spending some time at David's temple, the crew manages to get in touch with Tennessee who lets them know he is able to evacuate the surviving crew. Lopé and Cole then search for Oram; Cole discovers Oram's dead body, and is attacked by a facehugger, which latches on to Cole's gun. Cole manages to throw the Facehugger off his gun and tries to shoot it, but misses. In the confusion, it attacks Lopé and successfully latches on to his face. Cole runs to Lopé's aid and using his knife he cuts the Facehugger off Lopé and throws it aside, killing it. However, the resulting acid spray burns Lopé's left cheek and leaves him screaming in agony.

As Cole tries to bandage Lopé's wound, the Praetomorph born from Oram appears from an overhead shaft. Lopé gets up and runs off as it immediately drops down and lands on Cole. Cole is then torn apart and killed while Lopé escapes.

While hiding from the Praetomorph, he hears Daniels calling for him. The two regroup and escape the temple along with Walter. They then board the evacuation ship piloted by Tennessee. The Praetomorph follows them and manages to board the dropship, however Daniels manages to kill it. Walter and later Upworth treat Lopé's face as he then goes to sleep. Some time later, a Chestburster erupts from Lopé's chest, killing him, as the Facehugger from earlier had just enough time to impregnate him. The resulting Praetomorph subsequently kills Upworth and her husband Ricks.

Lopé was armed with an AR-15 rifle outfitted with a C-More Railway reflex sight and green laser sights.

Lopé being attacked by a Facehugger.

Lopé wrestling with the creature.
Add a photo to this gallery 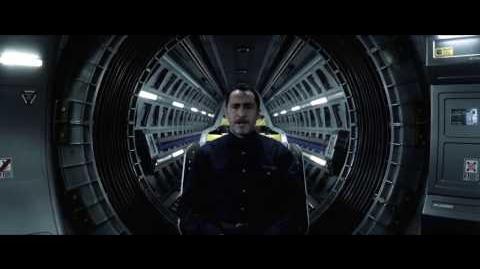 Retrieved from "https://avp.fandom.com/wiki/Dan_Lop%C3%A9?oldid=247341"
Community content is available under CC-BY-SA unless otherwise noted.