"Jesus, man... I'm hearing noises everywhere. Every creak and... just hurry the fuck up, will you?"
―Turner to Harris (from Alien: Isolation)

D. Turner[1] was a member of the Office of the Colonial Marshals on Sevastopol Station. When a lone Xenomorph was unleashed on the station by the crew of the USCSS Anesidora in 2137, Turner and his fellow officers struggled to keep order.

Turner was taken by the Drone when his team was ambushed by the creature, and was most likely subsequently impregnated with a Chestburster.

Hunt for the Drone

After a Xenomorph infestation was unleashed on Sevastopol Station by the crew of the Anesidora in 2137, Turner and his fellow officers attempted to hunt down the creature and kill it to regain control of the situation aboard the station.

Eventually the team received a sighting of the Drone in the station's engineering section, and they immediately headed there. There, Turner and the others discovered two dead bodies and a locked door. Turner began to question the mission, thinking it was a "fool's errand" since they knew nothing about the Xenomorph, including whether or not their weapons would be effective against it. Waits responded by asking Turner if he wanted to ditch the team like Ross.

Meanwhile, Garcia managed to unlock the door and informed the others, but almost immediately the Xenomorph emerged from the other side of the doorway and killed him via headbite. Harris attempted rushing towards the creature but was impaled by the creature's tail, killing him. Using their firearms, Waits and Turner were able to force back the Xenomorph and lock the door.

However, the creature climbed through the vents above them. Not willing to suffer the same fate as his colleagues, Turner aimed his shotgun at where he believed the Drone was. Unfortunately, it knocked out a grate directly above Turner, catching him off guard, before seizing him and returning to the vents.

It can be assumed that, like many other residents of Sevastopol, the Xenomorph took Turner into the Reactor Core's Hive, where he was cocooned and impregnated with a Chestburster, dying when the creature inside him reached maturity and hatched from his chest. 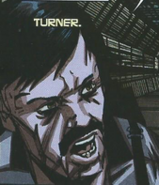 Turner as he appeared in the prequel comic.

Waits (left) and Turner (right) close the door on the Drone.

Turner is taken into the vents.

Turner's ID tag.
Add a photo to this gallery

Retrieved from "https://avp.fandom.com/wiki/D._Turner?oldid=247050"
Community content is available under CC-BY-SA unless otherwise noted.