"Looks like some sort of secreted resin..."
―Cpl. Dietrich (from Aliens)

Cynthia Dale Scott
Corporal Cynthia Dietrich[1] was a Hospital Corpsman with the United States Colonial Marine Corps, part of 2nd Battalion Bravo Team.[4] She was a member of the combat unit deployed to LV-426 aboard the USS Sulaco in 2179, to investigate the sudden loss of contact with the colony of Hadley's Hope. She was subsequently involved in combating the Xenomorph infestation at the colony.

Dietrich was part of Second Squad's rifle team, along with Private Frost.[2] She was taken by the Aliens during the early stages of the operation and was most likely subsequently impregnated with a Chestburster.

"They ain't payin' us enough for this, man."
"Not enough to have to wake up to your face, Drake."
―Drake and Dietrich (from Aliens)

Upon waking from hypersleep aboard the Sulaco, Dietrich found herself immediately aggravated by Private Drake's complaining. She later took the chance to practice her hand-to-hand combat techniques with Private Frost in the Sulaco's hangar bay before Lieutenant Gorman briefed the team on the mission.[2]

After landing on LV-426, Dietrich and the other Marines began to sweep the complex for survivors, during which time they discovered Newt, the last surviving colonist. She was taken to the operations center where Dietrich promptly checked her for injuries and evaluated her physical condition. She found nothing wrong with her beyond some minor malnutrition, although noted that she could not be so certain about the young girl's mental state. The remaining colonists were subsequently determined to be inside the colony's Atmosphere Processing Plant, and Dietrich and the other Marines set off to investigate.

"Maybe they don't show up on infrared at all..."
―Dietrich, moments before being ambushed by a Drone (from Aliens)

Upon entering the Atmosphere Processor, the Marines discovered the Xenomorph Hive and had to give up their Pulse Rifle ammunition to prevent gunfire from damaging the Processor's reactor, although Dietrich herself, armed with a flamethrower, was exempt from the confiscation. Further into the Hive, the unit discovered the cocooned bodies of the colonists, their chests ripped open from the Chestbursters they had been host to. Dietrich noticed Mary, who did not show any signs of the horrific wounds present on the other victims, and the Corporal quickly discovered that she was still alive.

Dietrich immediately began medical treatment, ignoring Mary's desperate pleas for death, naively trying to reassure her that she was going to be OK. At that moment the Chestburster inside Mary hatched, brutally killing her and forcing Dietrich and Sergeant Apone to incinerate the body. The dying creature's screeches woke the Hive, and the squad's motion trackers began detecting movement all around them. The Marines immediately switched to infra-red scanning but still could not see the threat. Ironically, Dietrich questioned out loud whether their targets would show up on infra-red at all, just moments before she was set upon by a Drone hiding on the wall right beside her — she had never even seen the creature. As she was hauled away, Dietrich accidentally discharged her flamethrower in a blind panic, engulfing Frost in the stream of fire, and with him, the confiscated Pulse Rifle ammunition he had been carrying; the subsequent explosion killed Private Crowe and injured Private Wierzbowski, who was then attacked by a Drone and either captured or killed.

The survivors of the disastrous ambush later discovered from Dietrich's PDT data stream that she had not been killed but was presumably being cocooned and used as a host for another Chestburster. She later died either from the creature inside her hatching or from the explosion of the Atmosphere Processing Plant's reactor.

Dietrich had something of an acerbic personality and would not refrain from making her feelings obvious if she was annoyed with how others were acting. Despite this, she was nothing but professional when it came to business and while on a mission Dietrich would focus solely on the job at hand. Being a Corpsman, she harbored a desire to help those in need of medical attention and would leap into action without hesitation whenever such services were required.

Dietrich was outfitted with standard-issue M3 Pattern Personal Armor, which she had customized with a red no symbol on the breastplate,[5] and an M10 Pattern Ballistic Helmet for protection, with a TNR Shoulder Lamp attachment for illumination. In the helmet band on the front of her helmet, she wore a nurse's caduceus[5] and on the back, she had written the words "BLUE ANGEL".[6][7] Additionally, Dietrich had customized the rear of her BDU pants by adding "KISS MY..." along with a drawing of lips in red.[5]

During the mission to Hadley's Hope, Dietrich was armed with an M240 Incinerator Unit and carried a Heckler & Koch VP70 in a fabric holster on her right hip,[8] which was tied to her belt with rope, similar to how Private Crowe wore his holster.[9]

As the section's Hospital Corpsman, Dietrich also carried a field first aid kit and basic medical supplies. It was also her job to prep the unit's cryotubes before they entered hypersleep.[10] 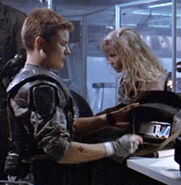 A helmetless Dietrich talking to Newt.

The Corporal with some of the other Marines.

Dietrich about to be captured.

A photo of Dietrich signed by Cynthia Scott.[12]