"Cuchillo"[3] (Spanish for "knife") was an otherwise unnamed enforcer working for the Los Zetas drug cartel who was kidnapped by the Super Predators and taken to the Game Preserve Planet in 2010. Together with the others dropped on the planet at that time, he attempted to find a way to escape and return to Earth.

Cuchillo was the first of the group to fall victim to the Predators, killed while the others were distracted during an ambush, as each members waged their own deadly battles. His body was then left as bait in an attempt to lure the others out.

Not much is known of Cuchillo prior to being brought to the Game Preserve Planet. What is known is that Cuchillo was "born on the streets, always on his own, grew up into the trade of being a killer". This likely led him to being the most dangerous enforcer in all of Mexico. Sometime in the early 21st Century he joined the Los Zetas drug cartel.[citation needed]

"...Falling. Yeah, same thing. I was in Baja. And then there was a light. And then chingao!!"
―Cuchillo describing his capture (from Predators)

As with all people abducted to the Game Preserve Planet, the only memory Cuchillo had of his capture is of a bright light and falling to the planet. Cuchillo was captured in Baja (which may refer to Baja California, Baja California Sur, or, less likely, Baja Verapaz, as there are several areas referenced as "Baja") before he was captured by the Super Predators.

Despite being armed with twin MP5Ks, Cuchillo, unlike the rest of his companions who all have extra ammo for their weapons, ran out of ammo very quickly, forcing him to utilize his M1911A1 in an attempt to fight the Hell-Hounds.

After the attack by the Hell-Hounds, the group realizes that Cuchillo is missing. He is later found calling for help in the middle of a trap set by the Super Predators. Because of the complexity of the trap, the group decides to move on without him. As an act of mercy Isabelle shoots him with her Blaser R93. Unknown to Isabelle, Cuchillo was already dead, previously killed by either the Hell-Hounds or one of the Predators.

His personality is that of a battle hardened veteran, most likely from the Mexican Drug War he had fought in while serving the Los Zetas. Cuchillo displayed a degree of faith, when Mombasa hypothesized that they all could be dead, his summary was: "This is hell!" He also crossed himself when the group encountered the corpse of Drake.

He does not have many lines in the film, as much of his dialogue was deleted. In the deleted scenes of Predators he appears to be misogynistic, as he repeatedly referred to Isabelle as "bitch" and generally had a poor attitude towards her, making comments along the lines of "I thought bitches weren't allowed to be snipers." To which Isabelle replies "Is that why they didn't take you?" which resulted in Cuchillo giving a forced laugh and calling her a bitch again.

Nevertheless Cuchillo also seemed to have some degree of honor, he showed disgust towards Walter Stans and his doing as a serial killer. Cuchillo states that, as bad as he may be, he kills only for money while Stans kills for nothing.

Chuchillo used dual personalized MP5K submachine guns fitted with leather tassels on the foregrips, as well as a heavily engraved nickel-plated Colt Commander with gold highlights as his sidearm.

Cuchillo prepares to fire his MP5Ks at the incoming Hell-Hounds 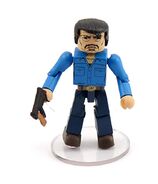 Minimates figure of Cuchillo.
Add a photo to this gallery 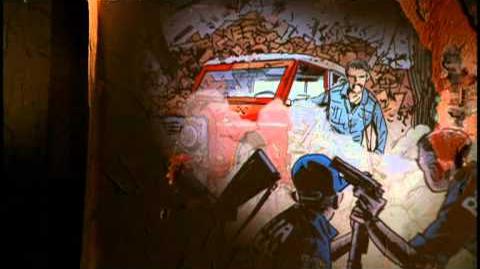 Retrieved from "https://avp.fandom.com/wiki/Cuchillo?oldid=246329"
Community content is available under CC-BY-SA unless otherwise noted.