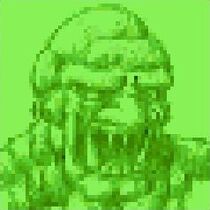 The Cravenor are an alien species of limited intelligence originating from the planet Brabenso. They live in a mountainous habitat and breathe from an oxygen-rich atmosphere. The species was encountered by the United States Colonial Marine Corps, who invaded their planet for colonization reasons. The outcome of this remains unclear.

Retrieved from "https://avp.fandom.com/wiki/Cravenor?oldid=206362"
Community content is available under CC-BY-SA unless otherwise noted.