"It is ridiculous, I know, but these combat androids... They unnerve me unlike any Xenomorph."
―Groves (from Aliens vs. Predator)

Combat androids, also known as combat synthetics, are specially armored and hardened synthetics constructed specifically for combat purposes. Although the equipping of androids with weapons or uninhibited combat abilities was prohibited by the Geneva Convention,[1] combat models have been widely employed by the Weyland-Yutani Corporation, who often used illegally manufactured units for security at critical Weyland-Yutani installations. Relaxing of regulations later also led to the use of combat androids by the United States Colonial Marine Corps.

Unlike commercial synthetics (such as the David and Bishop lines), which are designed to integrate seamlessly into human society, combat androids are designed solely for combat, and as such forgo many of the aesthetic niceties of the former models. Some combat androids are not even furbished with a full outer covering of skin, leaving many of their more superficial mechanisms, particularly on the face, exposed.[2] They are rarely programmed with the more finely-tuned social software installed on commercial synthetics, instead operating more basic interaction programs that leave them with access to only limited language, often spoken in mechanical, inhuman tones.[2]

Combat androids are also hardened against typical battlefield damage and hazards, with much sturdier construction including integral armor, often tough enough to largely withstand the light armor piecing ammunition fired by the M41A/2 Pulse Rifle.[2] Although losing a limb will affect a combat android's ability to move, it does not nullify their ability to fight, and it is not uncommon for individual models to continue to fight even once immobilized by the loss of a lower limb; in rarer cases, combat androids have been known to fight on even after losing their head (albeit with significantly reduced weapons accuracy).[2]

Their programming also reflects their primary purpose, with tactical and battlefield management software installed as standard. While combat androids lack the apparent intellect, nuances and personality of commercial systems, they are able to survey and adapt to changing battlefield conditions and plan attacks accordingly.[2] They are also programmed to utilize a range of weaponry with deadly efficiency. Some combat models would also release a small electromagnetic pulse after death, capable of stunning nearby targets and shorting out a Yautja's Cloak.[2] While only moderately damaging, this EMP blast could effectively disorientate anything caught in its radius, hopefully giving any other androids in the vicinity a momentary advantage over their aggressor.

Owing to their higher resistance to damage and greater strength when compared to humans, as well as their ignorance of pain, fear or moral concerns, combat androids are often preferred over live combatants in certain situations. Many are used as obedient, no-questions-asked bodyguards.[3] Their unflinching dedication to their duty, regardless of the odds against them or any wounds received, also carries with it a distinct psychological impact with regards to their opponents. However, even a combat android's advanced tactical software is incapable of matching the human intellect in most instances, and Androids are therefore best employed in menial defensive roles where adaptation and improvisation are not key factors. 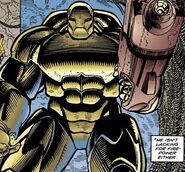 Character model of a Combat Synthetic capable of cloaking in Aliens vs. Predator. 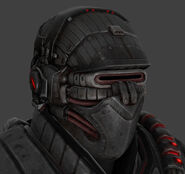 A combat android without their shield in AVP: Evolution.

A squad of Corporate Security Drones from Aliens: Defiance.

Retrieved from "https://avp.fandom.com/wiki/Combat_android?oldid=263654"
Community content is available under CC-BY-SA unless otherwise noted.