The Colt M1911, also known as the Colt Government, is an American-made semi-automatic pistol chambered for the .45 ACP cartridge. It served as the standard-issue sidearm for the United States Armed Forces from 1911 to 1986, seeing use in World War I, World War II, the Korean War, and the Vietnam War. The M1911 was replaced by the 9mm Beretta M9 pistol as the standard US sidearm in October 1986, but due to its popularity among users, it has not been completely phased out and modernized derivative variants are still in use by some units of the US Army Special Forces and the US Navy. It is arguably the most well-known and recognizable pistol in the world.

The M1911 entered service with the US armed forces in 1911 and although it was officially replaced in 1985 with the Beretta M9, it has continued to see use with American military personnel in specialist roles due to its immense popularity. Numerous other military forces around the world have also adopted the M1911 at various points, and the South Korean Air Force still employs the weapon as officers' sidearms.

The .45 caliber handgun is famous for its simple design and high stopping power, and the ease with which it can be modified and customized have led to countless variants since its introduction, ranging from mass-produced models to bespoke pistols. M1911-type pistols can be found being used as everything from competition pistols to compact concealed-carry weapons. The Tokarev TT-33 used by Soviet Russia during WWII was based on the M1911 design.

Dillon carried an M1911A1 as his sidearm during the disastrous mission in Guatemala, although he never used the weapon.

Mike Harrigan also had several M1911 variants — two Colt Commanders (compact variants of the M1911) and an AMT Hardballer Longslide — as backups in the trunk of his police car. He never uses any of them during the Los Angeles Yautja incident, although he briefly considered using the Hardballer during a firefight with Colombian Scorpions, before lamenting that it was "too small" and reaching instead for his cut-down Benelli M1 Super 90 shotgun.

Several of the people kidnapped and taken to the Game Preserve Planet were armed with M1911 variants. Royce, Mombasa and Drake all carried M1911A1s as their sidearms — Mombasa and Drake carried stock pistols, while Royce's was fitted with camouflage grips, Novak sights, a beavertail grip safety and a combat hammer. Cuchillo, meanwhile, was armed with a heavily customized Colt Commander, which was nickel-plated and decorated with engravings and golden accents.

Nebraska carried a modernized variant of the M1911 known as the Rail Gun (on account of its underbarrel attachment rail) while engaging the Fugitive and Upgrade Predators.

An updated version of the M1911, known as the M4 Pistol, was the standard issue sidearm of the United States Colonial Marine Corps. Marines aboard the USS Sephora were armed with M4s.

The "Okee-Doke Corral Cowboy Pistol", advertised on a television shopping channel aboard the USM Auriga, was an M1911.

In Aliens: Colonial Marines, the M1911 serves as the basis for the M4A3 Service Pistol. The M4A3 was initially supposed to be an M1911, but the name was changed and the weapon slightly modified for the release version. Though the label on the slide of the M4A3 still says "COLT AUTOMATIC CALIBUR 45" despite the name change. 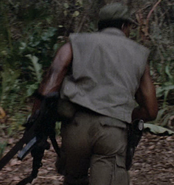 Dillon with his M1911A1 holstered on his hip.

The Colt MK IV Series 70 is the top gun on the right and the Colt Commander is on the left side directly to the left of the Smith & Wesson Model 66 and just above the stainless P226. 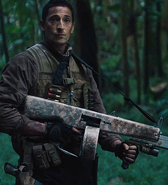 Cuchillo firing his M1911A1 at the Hell-Hounds.

Cuchillo aiming his M1911A1 at the Hell-Hounds.

Concept art for the "Colt 1911 .45" in Aliens: Colonial Marines. The Colt was eventfully replace with the updated M4A3 in the game.

The Royce Hot Toys figure's custom M1911A1. Note the lack of combat hammer and Novak sights seen in the film. 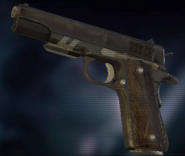 The M4A3 in Aliens: Colonial Marines. 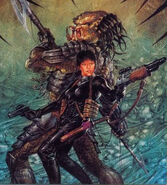 Add a photo to this gallery
Retrieved from "https://avp.fandom.com/wiki/Colt_M1911?oldid=259286"
Community content is available under CC-BY-SA unless otherwise noted.