The Cloned Xenomorphs[1] were an altered strain of the species Xenomorph XX121 that were bred aboard the USM Auriga in 2381.[2] They were an aberrant line of the species spawned from the Queen extracted from the clone of Ellen Ripley, known as Ripley 8. The cloning process used to acquire Ripley 8 and, subsequently, the Xenomorphs resulted in the Queen and her Drones[citation needed] becoming altered through the unintentional inclusion of human DNA.

The Cloned Xenomorphs were not a naturally-occurring strain, and were artificially created through genetic engineering. Following the events on Fiorina "Fury" 161, blood samples of the deceased Ellen Ripley were collected from the planet and used as the starting point in an ambitious program to clone Ripley and, it was hoped, the embryo of the Xenomorph Queen that had been growing inside her at the time of her death. After 10 years of experimentation[3] and 7 failures that only resulted in the creation of horrifically deformed hybrids, the program apparently succeeded and the Queen embryo was harvested by United Systems Military scientists aboard the Auriga.[4]

However, the cloning process had not been a perfect success, and unbeknownst to the scientists the DNA of the Xenomorphs and Ellen Ripley had become mixed in the process, endowing both the Ripley clone and the Queen with anomalous traits and abilities, traits that were passed on by the Queen to her offspring, resulting in the Cloned Xenomorphs.

At a distance, Cloned Xenomorphs bear a strong resemblance to normal human-spawned Xenomorph Drones, but upon closer inspection they possess several unique differences resulting from their contaminated DNA. Most obviously, their skin has a distinct shimmering green hue not seen on any other Xenomorphs, making them more insect-like in appearance. Their necks are much fleshier than the biomechanical design seen in normal Xenomorphs, a change that may relate to their ability to roar in a fashion not seen with other Xenomorphs. Their bodies also adopt a partially quadripedal stance like that of the Runner, with digitigrade hind legs, rather than the primarily bipedal posture of other human-spawned Xenomorphs, such as Warriors or Drones. Their tails have flat ridge of spines at the base of the blade, making them excellent swimmers. Like regular Drones, they have smooth skulls.

The Cloned Xenomorphs are notably capable of breeding far more quickly than typical Xenomorphs, a characteristic credited by Dr. Wren to unintentional alterations incurred during the cloning process used to create them.[3] This allows them to multiply even more rapidly, and causes them to quickly overwhelm the Auriga. In terms of physical ability, they are comparable to normal human-spawned Xenomorph Drones, being capable of battering down steel doors and tearing open metal grates and floors with their bare hands.[4] They can spit acid, often aiming for a victim's face to blind and subdue them. They also possess heightened agility, with some even seen to dodge incoming weapons fire.[4]

Thanks to the Xenomorph's ability to inherit memories genetically, and as a side-effect of the cloning process that created the Cloned Xenomorphs, the creatures have access to Ellen Ripley's memories through their Queen, although they do not apparently fully understand these memories.[5] Through this connection, the Xenomorphs consider Ripley 8 to be one of their members and consequently spare her when she is captured whilst trying to escape the Auriga, delivering her unharmed to the Queen.[4][6]

The Cloned Xenomorphs are more vicious and fluidly intelligent than normal Xenomorph Drones.[7] They are shown to possess impressive problem solving skills and the ability to learn rapidly and even set traps to lure and ambush victims.[4] The Cloned Xenomorphs were first able to escape their containment cells on board the Auriga by killing one of their own and using the effects of the dead creature's acidic blood to melt through the enclosure's floor and allow the others egress. Similarly, the Lead Alien was shown to learn almost immediately that disobedience would result in punishment in the form of a freezing nitrogen spray, and later used the same spray to eliminate USM personnel searching for it.[4] Later, a Cloned Drone used discarded weapons to lure Frank Elgyn to his death.

As with the previous film in the franchise, practical Cloned Xenomorph effects were provided by Amalgamated Dynamics, Inc. For the film, the creatures were specifically designed to look "more cunning and vicious" that earlier versions, with harder, more angular lines and more prominent chins.[8] There was also a shift away from the biomechnaical look of the earlier creatures in favor of a fleshier, more purely biological style. Among the refinements added to the practical suit over the previous films were prehensile dorsal spines, capable of cable-controlled motion. Tom Woodruff, Jr., who had previously played the Dragon in Alien3, described the human-spawned Xenomorphs in Resurrection as feeling more like a dog than the previous creature, despite having been born from human hosts.[9]

For the first time, Alien Resurrection would feature Aliens created entirely with CGI (Alien3 had previously included a single, brief shot of the Dragon's head cracking that was achieved with CGI). The CGI Aliens were handled by Blue Sky Studios, who were provided with a scale maquette by ADI that served as the basis for the studio's digital model.[10] The Aliens' digitigrade legs were actually suggested at a late stage by Blue Sky; after showing director Jean-Pierre Jeunet how the effect could be accomplished digitally, he elected to have the double-jointed limbs incorporated into the design.[8] The Xenomorph's swimming motions were inspired by the marine iguana (Amblyrhynchus cristatus), which is native to the Galapagos Islands.[11]

H. R. Giger himself was very critical of the redesign, later saying, "I always wanted my Alien to be a very beautiful thing. Not just disgusting, not just a monster, but something aesthetic. Throughout the creature's evolution what they've done is change it from something aesthetic to something that looks like shit. I mean literally, it looks like a turd."[12]

A Cloned Xenomorph swimming in the Auriga's flooded canteen.

A Cloned Drone in captivity.

A figure of a Cloned Xenomorph.

Behind the scenes picture of a Drone with Ripley.[14]

A "Resurrection Warrior" as seen in AVP: Evolution. 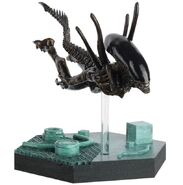 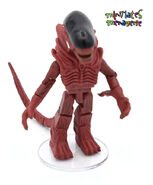 Minimates figure of the Resurrection Xenomorph.

NECA figure of the 'Resurrection Warrior'.
Add a photo to this gallery

Retrieved from "https://avp.fandom.com/wiki/Cloned_Xenomorph?oldid=239832"
Community content is available under CC-BY-SA unless otherwise noted.