Leader of the Hive aboard the Auriga.
Secondary live-birth human reproductive system.

The Cloned Queen[3] was an altered Xenomorph Queen born aboard the USM Auriga in 2381.[1] She was the leader (and the first) of the Cloned Xenomorphs that were bred by the United Systems Military aboard the vessel. She later gave live birth to the Newborn as a result of genetic crossing with her host, Ripley 8, and was killed by the creature shortly afterwards.

"And... there it is!"
―Gediman, seeing the infant Cloned Queen for the first time (from Alien Resurrection)

The Cloned Queen was the result of a 10-year project conducted by the USM to recreate the Xenomorph XX121 species for use as a biological weapon.[4] Using blood samples taken from Ellen Ripley by Jonathan Clemens on Fiorina "Fury" 161, the USM succeeded in creating a clone of Ripley and with her the Queen Chestburster that had been growing inside her at the time of her death. Once the Ripley clone was fully grown, the infant Chestburster inside was surgically removed and allowed to grow to the Egg-producing stage, at which point her Eggs were harvested and used to impregnate a group of civilians kidnapped by the crew of the Betty.

The Queen spent much of her early life isolated and under the study of Dr. Wren and his team. Even so, she was aware of her offspring's birth and growth in other areas of the Auriga and waited patiently for an opportunity to escape and begin a Hive.[5]

The Lead Alien soon used its intelligence and cunning to instigate an outbreak from containment, and before long several Drones and the Queen herself were free aboard the Auriga. As the Xenomorphs slaughtered or chased off the vessel's crew, the Queen quickly established a Hive in a waste tank at the bottom of the ship.[6]

"This time there is no host. There are no Eggs. There is only her womb and the creature inside! That is Ripley's gift to her. A human reproductive system. She is giving birth for you, Ripley! And now, she is perfect!"
―Gediman, ranting in the Hive (from Alien Resurrection)

Once there, she began to develop a secondary reproductive cycle, derived from her human DNA, that allowed her to give live birth to a new kind of offspring from a womb that grew in place of her typical ovipositor. As with human births, the process was incredibly painful for the Queen, but led to the birth of the "Newborn", a Human/Xenomorph hybrid creature created as the ultimate product of the genetic mixing. Immediately after birth, the Newborn apparently considered Ripley 8, who was present in the Hive, to be its true mother. As a result, the creature turned on the Queen, killing her by tearing off the upper jaw of her face with its bare hands.

Unknown to the Auriga scientists who had created her, imperfections in the cloning process had caused the Queen to be fundamentally altered through cross-contamination with Ellen Ripley's DNA. Owing to these changes, she was not a true Xenomorph Queen. By far the most obvious manifestation of these alterations was her secondary reproductive cycle, allowing her to give live birth without the need for Eggs. However, she also possessed more subtle changes, including a shimmering, brown-green coloration to her skin.

The Cloned Queen possessed intellect typical of Xenomorph Queens, but also had some form of mental link with Ripley 8, allowing the two to communicate, to a degree, via some form of telepathy. Notably, the Queen was also able to recognise many of the scientists studying her from their presence at her "birth", when she was surgically removed from Ripley 8 by Dr. Gediman, despite the fact she was merely an immature Chestburster at the time.[7] Furthermore, the Xenomorph species' ability to inherit memory genetically, coupled with the genetic mixing of the cloning process, meant that the Cloned Queen had access to memories from Ellen Ripley's former life, including events aboard the USCSS Nostromo and at Hadley's Hope on LV-426.[8] She even possessed an ability to understand written human languages, able to register the nametags of General Perez and his associates, as well as read the sign outside the door of its containment cell, which was written in seven languages, all of which the Queen was able to understand.[9]

The Cloned Queen's head was in fact the very same head used to portray the Acheron Queen in Aliens, sourced from collector Bob Burns and repainted with a new shimmering, pearlescent paint scheme incorporating brown and green tones.[10] The original molds for the creature's arms, legs and tail were recovered from a replica company in Colorado, but the molds for the Queen's body were found to have been destroyed beyond repair in the ten years since Aliens was made.[11] However, this did not prove to be a major issue, as for most of her screentime in the fourth film, the Queen's torso and abdomen were to be grotesquely distended as a result of her new live-birth reproductive mutation.

The Cloned Queen in pregnancy.

The Queen roars in pain.

The Cloned Queen and the Newborn. 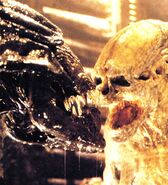 Retrieved from "https://avp.fandom.com/wiki/Cloned_Queen?oldid=256633"
Community content is available under CC-BY-SA unless otherwise noted.