The Cleaner case[1] was a storage device used by Wolf during his clean up mission in Gunnison, Colorado, Earth in 2004. Given the device's name, it is likely that the cleaner case was only used on special Xenomorph "clean up" operations.

The case's opening mechanism was activited when a Yautja ran his index claw down a black seam in the center of the case. Wolf's case contained a Tracking Syringe, Dissolving Liquid and an integrated Self-Destruct Device. Wolf wore his cleaner case on his back, to the right of his Medicomp (when facing his back).

Wolf arrived within the crashed Scout Ship and took off his cleaner case for further analysis. Wolf later activated the case's Self-Destruct Device, leading to an implosion of the Scout Ship, leaving no trace of it behind.

The cleaner case was created by Amalgamated Dynamics, Inc.,[2] who did most of the practical effects for Aliens vs. Predator: Requiem. 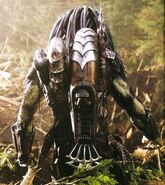 A production still of Wolf wearing his cleaner case.[3]

Behind the scenes image of the cleaner case.[2]

The figure's case opened and with its contents removed.[7]

The figure's case closed with its contents stored inside.[7]

Waist-mounted tool belt.
Add a photo to this gallery

Retrieved from "https://avp.fandom.com/wiki/Cleaner_case?oldid=236182"
Community content is available under CC-BY-SA unless otherwise noted.