Start a Wiki
watch 01:16
The Loop (Movies)
Do you like this video?
The Classic Mask,[1] was a Yautja bio-helmet used primarily by Jungle Hunter Clan members such as the Jungle Hunter, who used it during his Hunt in Guatemala in 1987.

The Classic Mask was gray in color and featured three red Plasmacaster targeting lasers located on the right side of the mask just above the right eye. Unlike some other bio-helmet designs, the Classic mask featured two separate holes for the wearer to see through which flashed yellow when cloaked.[2]

The Classic mask in AVP: Evolution. 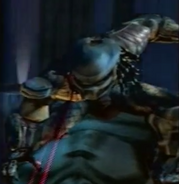 The Jungle Hunter (skin) with his bio-helmet in the skin selection menu in Predator: Concrete Jungle.

The Jungle Hunter (skin) with his bio-helmet in Predator: Concrete Jungle.
Add a photo to this gallery

Retrieved from "https://avp.fandom.com/wiki/Classic_Mask?oldid=245538"
Community content is available under CC-BY-SA unless otherwise noted.