Christopher "Chris" Oram[2][3] was the Executive Officer and Chief Science Officer aboard the colonization spacecraft USCSS Covenant. He was also the husband of the crew's biologist Karine Oram. He was serving on the Covenant during its disastrous voyage to Origae-6, during which it suffered several catastrophes that resulted in the loss of most of the ship's crew and its hijacking by the android David.

Chris Oram led the expedition team that set down on Planet 4 and, as a result, he was killed by a Praetomorph chestburster after David tricked him into being subdued by a facehugger.

Oram had a very strict Pentecostal upbringing, during which he was regularly beaten for breaking the rules. He once mentioned that he saw the Devil at a young age, referring to his abusers.[4]

While on route to Origae-6, the Covenant was damaged by a neutrino burst, killing 47 out of the ship's 2000 colonists, and the ship's captain, Jake Branson. As the executive officer who was next in the chain of command, Oram was duly declared captain of the Covenant, a responsibility for which he admitted to not being ready while speaking with his wife.

During his first meeting with the other officers of the ship, Oram offered brief condolences on Branson's death but then gave orders for them to immediately proceed with repairs to the ship, arguing that while the captain was one life lost the crew had the responsiblity to safeguard the survival of the remaining colonists which still numbered nearly 2000.  Oram asked how the accident could have happened, and Walter responded by saying that there was no way to prepare for a random occurrence such as a neutrino burst. Faris concurred, remarking that it was just "bad luck." Oram responded by saying he did not believe in luck, and that the crew needed to do a better job of preparing for the worst if they expected to make it to Origae-6.  Later when Oram observed from the bridge while the other officers toasted Branson before his space burial, Oram was angered that they defied his orders and attributed their mistrust in him to his faith, although he was warned by Karine to tread carefully.

While repairing the ship from the outside, pilot Tennessee intercepted a rogue transmission originating from an unidentified planet nearby, analysis of which suggested that it was perfect for human habitation. Since this planet was much closer than Origae-6, Oram reneged on his earlier tirade and gave the order to travel to this planet instead, much to the dismay of Daniels, who argued that their training was structured to prepare them for Origae-6 only.

Oram and several crew members landed on the planet to survey the area. After instructing Faris to stay with Lander One, Karine and Ledward went one way in order to run some tests on the environment, while Oram, Daniels, Lopé, and Lopé's security team traced the source of the transmission Tennessee found. During their respective investigations, guards Ledward and Hallett were infected with Chemical A0-3959X.91 – 15 by separately ingesting spores from local flora, and Ledward began to show signs of sickness. Karine radioed Oram, informing him of Ledward's plight, and Oram led the crew back to the ship.

As the group returned to the ship, Hallett began suffering from the chemical, thus slowing the group down. As they struggled to return to their dropship, He receives garbled but frantic sos from Faris, who has Neomorph which was birthed from infected Ledward wreaking havoc in Lander One where Karine and Ledward returned ahead of others. Even though Faris' message was severely garbled, it was more than enough for Chris and others to realize that something terrible is happening to Faris, Karine and Ledward. They were unable to return on time before Lander One exploded due to Faris accidentally shooting some explosive barrels in an attempt to kill the Neomorph that spawned from Ledward, resulting in hers and Karine's deaths. Concurrently, a Neomorph burst from Hallett's throat, and the two Neomorphs teamed up to attack the group. Ankor was killed, Walter lost a hand before one Neomorph was killed, and the other was scared away by an arriving David's flare gun.

David led the surviving crew to his temple, where they tried to make contact with Tennessee in order to escape the planet. While away from the rest of the crew, Rosie was killed by the surviving Neomorph. David found the Neomorph and managed to keep it calm; however, Oram spotted them and Rosie's dead body and, against David's pleas, shot the Neomorph to death. Oram, outraged, demanded David tell him everything he knew; David agreed, and led Oram to a room full of ovomorphs, where he convinced Oram to look inside of them. Oram, not knowing what to expect, was attacked and subdued by a Facehugger.

After waking up, a dazed Oram asked David what he believed in, to which David replied, "Creation". Seconds later, a Chestburster emerged from Oram, killing him. His body was later found by Cole, who was killed by the Praetomorph born from Oram shortly afterward.

Chris Oram was a man of faith, and as such believed this to be the reason why Weyland-Yutani had passed him over on various occasions. He was understandably nervous when taking command from the recently-deceased Branson. However, Oram's attempt to immediately assert his newfound authority quickly alienated him from his grieving subordinates who viewed him as insensitive, plus he misspoke foolishly when attempting to comfort Branson's widow Daniels. To assuage his anxiety, he carried a pair of worry beads which he would rub together when aggravated. He looked upon his wife Karine as a steadying influence and was stricken when she was killed by a Neomorph aboard Lander One.

Oram was also prone to making poor decisions under pressure, as flagrantly evidenced by his ill-fated attempt to investigate the mysterious Planet 4, and his premature claims that a colony could be constructed there without first surveying the immediate environment. Perhaps Oram's most egregious misstep, however, manifested itself in placing his trust in the unpredictable android David, who exposed Oram to his creations, and so the acting captain's death would come about as a result.

Oram looking at the Egg.

Oram subdued by a Facehugger.

Oram after being subdued.

Pop! Vinyl figure of Oram.
Add a photo to this gallery 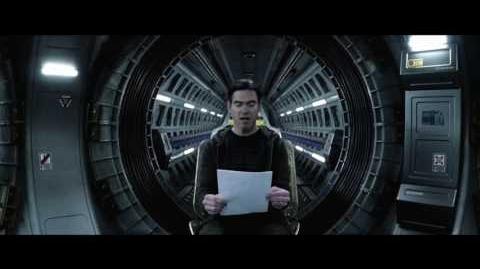 Retrieved from "https://avp.fandom.com/wiki/Chris_Oram?oldid=256725"
Community content is available under CC-BY-SA unless otherwise noted.