Xenopedia
Register
Don't have an account?
Sign In
Advertisement
in: Pages with reference errors, Yautja individuals, Predators featured in the movies,
and 4 more
English

Ian Whyte[3]
Chopper[4] was a Young Blood Yautja who, in 2004, traveled to Earth with his brothers[1] Scar and Celtic to undertake an initiation Hunt in an ancient Predator pyramid beneath the ice on Bouvet Island. In stalking and killing Xenomorph prey, they hoped to become Blooded Yautja.

Chopper was the middle of the three brothers.[1][5] Distracted by the humans, he failed to slay any Xenomorphs during the ritual hunt and was quickly ambushed and killed by Grid.

After slaughtering the members of the Weyland Industries expedition stationed at Razorback Point Whaling Station with Scar and Celtic, the three Yautja entered the pyramid deep beneath the ice to begin their rite of passage hunt. After discovering that their Plasmacasters had been taken by the other members of the human expedition, the Yautja split up to recover the weapons.[6] Chopper eventually caught up to a group of survivors with Celtic, and in the ensuing melee prepared to kill Lex. However, he was ambushed from behind by Grid, who impaled Chopper on its tail and lifted him into the air, before finishing the Predator with a Headbite.

Chopper was the most careless of his three brothers, and was prone to risk-taking behavior.[7] Despite this trait, as well as being the lightest armored of the three, Chopper's mastery of his Scimitar weapons was supposedly unmatched,[8] unlike Celtic who preferred using his brute strength in combat, or Scar who used his cunning. Chopper constantly yearned for his older brother's approval,[9] and it was seemingly this desire to prove himself that resulted in his gruesome death.

Chopper possessed a fascination with the self-destructive nature of Humans, wearing two skulls on his back as a tribute to this sentiment.[10]

The basic body suits for all three Predators in Alien vs. Predator — Scar, Celtic and Chopper — were actually poured from the same mold, before being customized after the fact to make each character appear unique. Sixteen suits were created, each painted in the same color scheme so that they could be replaced at any time if necessary.[3] As in Predator 2, the armor was created separately as the script required it to be removed; armor pieces, made from either fiberglass or flexible urethane, were used to customize the suits and create the three different individuals.[3] Chopper was given long Scimitars in place of the traditional Predator Wristblades (weapons that earned the character its name), as well as a pair of skulls mounted on top of its backpack, implying previous hunting experience. Chopper's helmet featured a gilled design on the cheek areas.[3]

Chopper with one of his trophies. 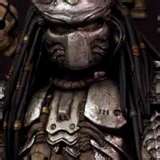 The collectible bio-helmet replica from Sideshow.

Chopper faces Grid before he is killed with a Headbite.

Chopper with his comrade Celtic. 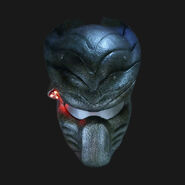