"Um, Miss Vickers, is there an agenda that you're not telling us about?"
―Holloway (from Prometheus)

Logan Marshall-Green
Doctor Charles "Charlie" Holloway[1] was an archaeologist who was assigned to assist the USCSS Prometheus expedition in discovering the homeworld of the Engineers on LV-223. He has a romantic relationship with Elizabeth Shaw.

Born on Earth in 2058, Charles Holloway becomes part of an archaeological dig where evidence of alien life is discovered.

A skeptic and adventurous archeologist. Holloway's lover and colleague Elizabeth Shaw showed the most religious zeal out of the Prometheus' crew, but he remained always the more objective of the two.

Over the course of the film, Holloway is infected with the Engineer black liquid by David. The infection at first very slowly mutates him and no symptoms are present. Holloway eventually has sex with Shaw and unknowingly impregnates her with an alien monster. After sleeping with Shaw he begins to feel a fever and also notices a very small organism in one of his eyes.

To save the life of his beloved Elizabeth and to stop his pain, Holloway is burned alive at his own request by a reluctant Vickers, who refused to let him back on board since he could contaminate and infect other crewmen.

Holloway on the bridge of the Prometheus.

Holloway (right) and Shaw (left) inside the RT-01 Transport.

Holloway pleading Vickers to burn him. 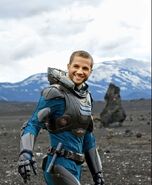 The cancelled NECA figure of Holloway.